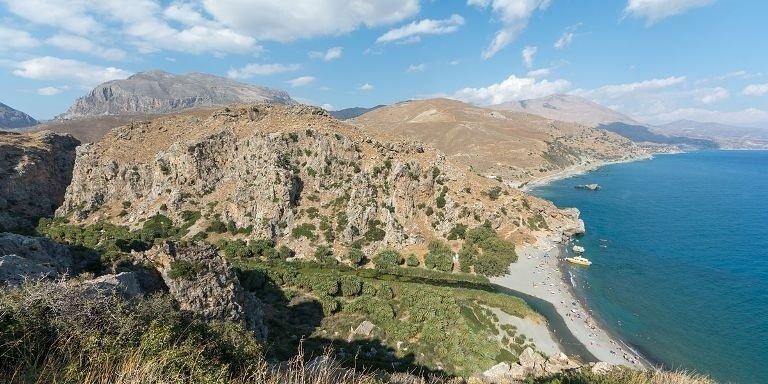 Preveli Crete - do you want to know the way to paradise?

Πρέβελη - ah, it is no longer a secret, so we can show you the way, how to get here, and what to see and enjoy along the way, some beaches close by and where to stay, and history to explore, and accommodation nearby. 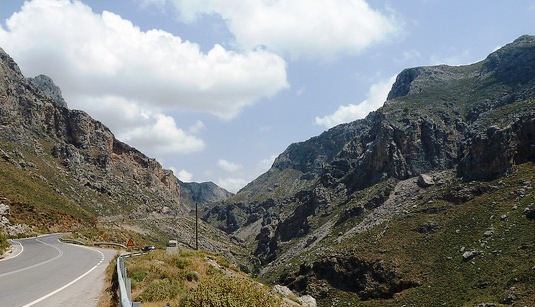 21 km south of Rethymnon town you will find the village of Koxare Κοξαρέ. This is where the Kourtaliotiko Gorge begins and winds its way south to end at the palm forest and beach of Preveli.

As you drive south from Rethymnon you will enjoy the scenery of the gorge. Stop carefully in some spots that are wide enough and enjoy the rugged gorge, making sure to look out for birds of prey; the Griffon Vultures, Golden Eagles and the striking-looking Bearded Vultures.

Then come to the Venetian Bridge and taverna, after about 30 km of driving this is a good place to stop and refresh for your first coffee of the morning.

The bridge is also known as Preveli Bridge because it was not actually built by the Venetians, it was built by locals and funded by the monks from the nearby Monastery of Preveli, and dates back to the 18th Century. It crosses the large, serene Kourtaliotis River and is a pretty sight to see. This marks the entrance to one of the walks of the Kourtaliotiko Gorge, and hikers can start their walk to the beach from here.

About 2 km to the south of here is the ruin of Kato Preveli Monastery. 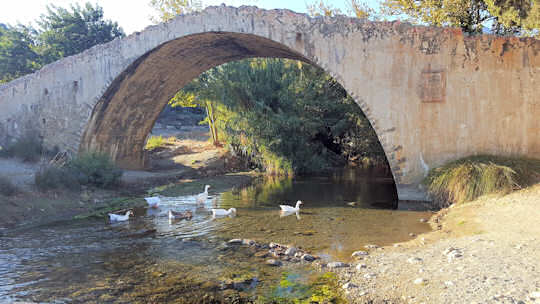 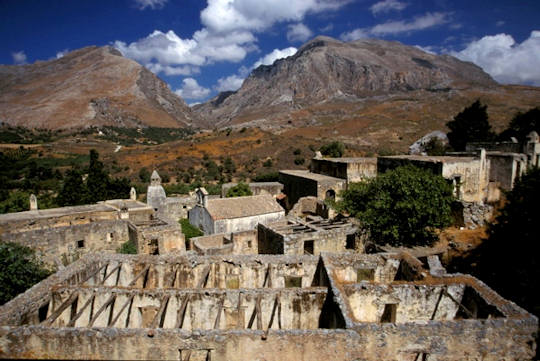 Kato Preveli Monastery is in ruins

This historic site of the Monastery of Prodromos known as kato or lower Preveli Monastery to distinguish it from the newer and functional monastery which exists today, this settlement dates back to the 10th Century, although the earliest date recorded is 1594 as seen on the engravings on the site.

This monastery was destroyed by invading Turkish forces in 1649. The site is open to visitors and it is well worth wandering around here to feel the spirit and silence. There is a small entrance fee.

Especially during summer, when you will be surrounded by many visitors at the open and active monastery, it is refreshing to come here and take some time to contemplate history. Some of the ruins are restored, the church is in use and there is a small museum. History buffs will want to stop at both monasteries.

Continue 3.3 km to the south around the curve of Mount Mesokorfi and you will now see magnificent views over the Mediterranean, and reach the active Monastery of Preveli. 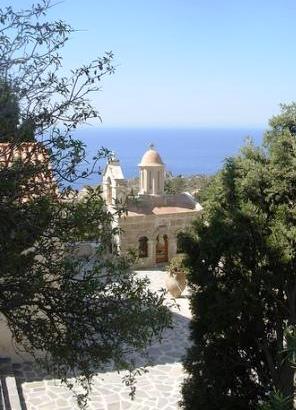 The Monastery of Preveli or Monastery of Theologos is also known as piso or back Monastery to distinguish it from the other site, and because it sits behind the mountain of Mesokorfi. This settlement dates from 1670, on a site which had a chapel or monastery as early as the 10th Century.

This is one of the holiest active monasteries in Crete today and is still home to monks. Be aware and respectful when you visit and ensure you dress appropriately.

Visitors can see the icons and relics in the museum and visit the church. Also visit the monument, which we will tell you about below.

This is officially the Holy Stavropegiac and Patriarchal Preveli Monastery of Saint John the Theologian (Evangelist), simply known as the Monastery of Preveli or Μόνη Πρέβελη.  Those interested in the culture and history of Crete will visit to understand more deeply the intricate web of connections between the people, the rebels, the church and the freedom of Kriti.

International Memorial for Resistance and Peace 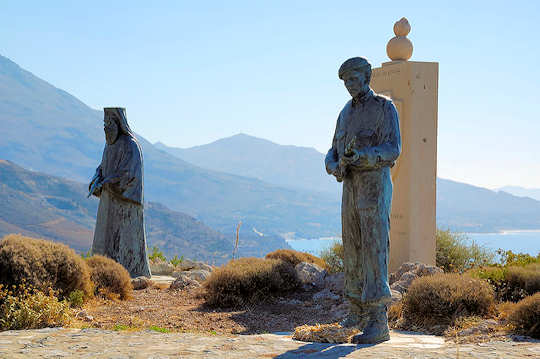 At Preveli Crete -The International Memorial for Resistance and Peace is made up of two sculptures; the Abbot Agathangelos Lagouvardos from 1941 and a figure representing the soldier of the Allies. The monument is dedicated to the Cretan citizens and those of the Australian, New Zealand and British forces for their actions during the Second World War, specifically during the Battle of Crete and the Resistance.

Standing on Monastery grounds, located between the monastery and the entrance to the Preveli Beach, looking south from the rugged, treeless hills out over the intense blue of the Libyan Sea, this monument is the result of years of collaboration between the monks at Preveli and the Cretan people, as well as Allied soldiers who wanted to make a gesture to honour the monks and the rebels of Crete for saving their lives during that battle.

More information on the Monastery of Preveli website here.

Geoff Edwards OAM was an Australian soldier who was helped to escape out of Crete by the monks during the Battle of Crete in 1941, and who subsequently named a suburb in his home state of Western Australia 'Prevelly' in honour of the mateship and aid he received in Crete. He built a chapel there, named St John The Theologian which still stands there today.

The plaque on the chapel in Prevelly, WA, located in the Margaret River region, reads:

"Blessed and opened by His Eminence Stylianos, Greek Orthordox Archbishop of Australia on Monday 4 June, 1979.

This symbolic Greek Orthodox chapel was given to the Greek people by Geoff and Beryl Edwards, who founded the adjoining village and namd it Prevelly as a token of gratitude to the Prevelly Monastery and surrounding villages on Crete, where after the Battle of Crete in 1941 the founder and hundreds of Australian and New Zealand and British soldiers were sheltered, hidden and helped to escape to the free world.

May all who pause here remember with gratitude the courage of the Greek people who fought and died for the freedom of their land and ours."

In his book 'Road to Prevelly', published in 1989, Geoff Edwards tells the story, and he went on later in life to be awarded the Order of Australia medal for services to the Greek community.

Finally in the year 2002, this monument here in Preveli was completed and opened to mark the remembrance of the Battle of Crete.

As you pause in your day, may you contemplate the activities that occurred on this very soil, so many years ago.

Preveli Crete - continuing on from the monument, drive 1 km to the east and you will find the parking space high above the Preveli Beach and Palm Forest. A small parking fee is necessary here. The steep walk down to the beach takes about 20 minutes, with magical views.

The beach and lagoon can get crowded in summer, with taxi boats, boats and yachts visiting from nearby beach villages. It is best to visit early to avoid the crowds, or of course, visit in spring or autumn.

Once you are there, the heavenly, serene river and lagoon is like a hidden paradise engulfed in the rocky arms of the gorge. 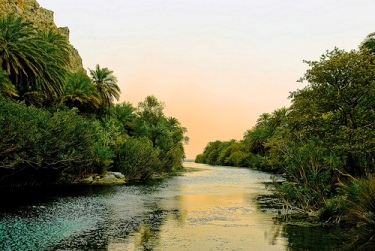 Looking out from the lagoon at Preveli Crete at sunset

At Preveli Crete - there is no accommodation on the lagoon part of Preveli Beach itself, as it is a completely natural uninhabited and remote beach. The closest accommodation is reached by a different road to the east and a walk of about 5 minutes around the small headland.

Another option is to stay in Plakias, and on the other beaches to the west and east of here. Or perhaps stay inland at a holiday home near the village of Asomatos. 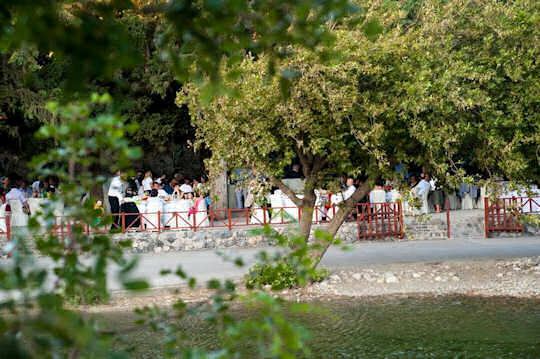 The seafood is so fresh here, you must make a beeline for the fish tavernas strung along the beach. But don't forget to head up into the hills to Mariou Taverna. Best to reserve a table on the terrace with a view and arrive one hour before sunset. Farm to table - is there any other way to do it? 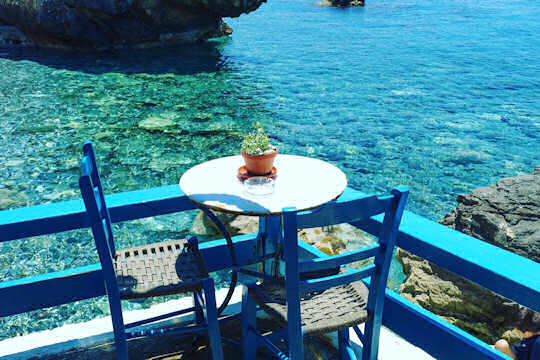 Fotia Taverna, right on the water at Agia Fotini Beach, 14 km drive to the east of Preveli Crete 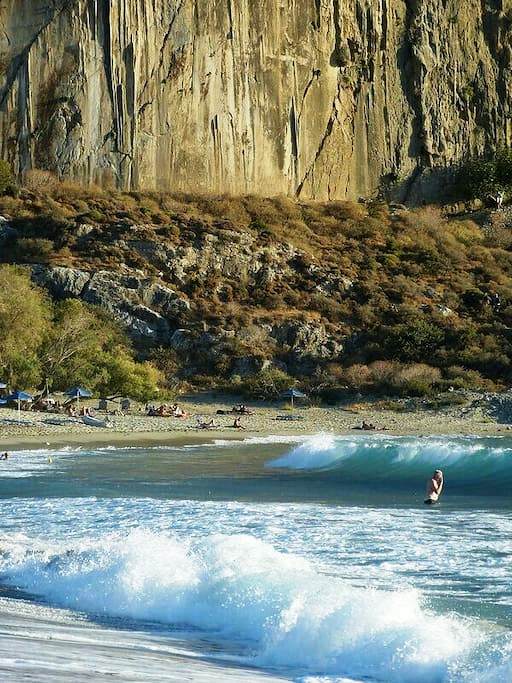 Around the headlands to the west of Preveli Beach is the beautiful wide Plakias Bay. Take a boat ride here or drive over mountain roads for 9 km. Here is the small coastal village of Plakias where you can relax, swim and visit some excellent seaside tavernas.

Some highlights of the region include:

From the town of Rethymnon in the central north of Crete, drive south for 43 km, visiting first the Venetian Bridge, and enjoying a stop at the taverna, then Kato Preveli Monastery, a ruined monastery, then the Kourtaliotiko Gorge Φαράγγι Κουρταλιώτη, the existing and active Preveli Monastery and its monument, then finally Preveli Beach and Palm Forest.

Driving south from Rethymnon, follow the road marked 'Agia Galini'. Drive 20 km then, just after the small village of Pale Παλέ, turn right following signs to Koxare Κοξαρέ and Preveli. As you drive south you will see spectacular views through the Kourtalikos Gorge.

10 km south of Pale, you will get to a small historic arched bridge over the river, and a taverna. Stop awhile here. This is also the beginning of a walk through the Kourtalikos Gorge to the sea.

Then visit the nearby ruins of Κάτω Μόνη Πρέβελη or Kato Moni Preveli, an old disused monastery, just 2 km south.

See the location of Preveli Beach on the map below:

Getting here by flights, ferries, bus and hire car below: 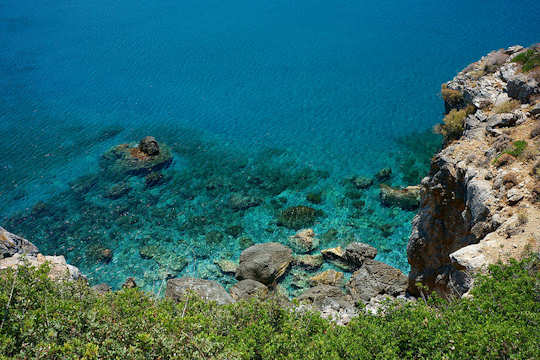