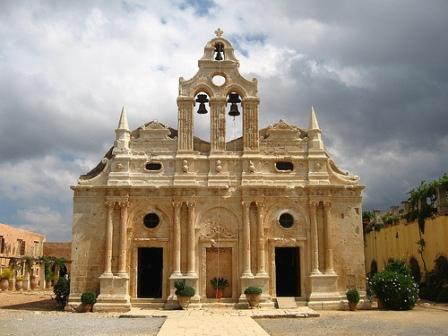 The original monastery and large grounds was built in the 16th century. The location, grounds and architecture alone make this a very enjoyable visit. Combined with a visit to the Amari Valley, Arkadi Gorge or E4 European Walking Paths, this makes for a full day of exploring Crete and the Rethymnon region. 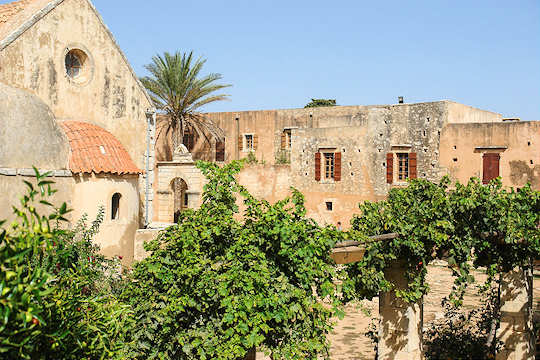 The grounds of the monastery include cloisters, gardens, a refectory, a museum, cellars, stockrooms, the church the gunpowder magazine

This monastery played an important part in Cretan history during the rebellion against Turkish domination of the island. In 1866, the monastery came to the notice of the Turkish Pasha as many rebels were sheltering there and in the rough gorges and hills nearby. Hence the monastery became a symbol of insurrection and freedom fighting, and a safe haven for Cretans fleeing the Turks.

So a Turkish fighting force of 1500 attacked the 950 or so men, women and children who were sheltering in the monastery grounds. When the attack became successful and things looked grim for the rebels, the Abbott gave the order, as planned, to blow up the gunpowder stores and kill the rebels, women and children, rather than fall into the hands of the Turks.

This is indeed what happened, and so many proud Cretans died that day, 9th November 1866. The news of the rebels actions swept across Europe at that time and lead to further support for Greek independence.

The façade of the church has been rebuilt in a breathtaking Venetian style, the interior church dates from 1587. There is a museum within the grounds of the monastery, which tells the story of the 1866 uprising. Here is kept the official banner of the rebellion, vestments and relics of the monastery. The monastery still functions as a religious centre.

Today, a visit to the monastery and grounds is an inspiring reminder of our modern freedoms, and a chance for a deeper insight into the Cretan spirit. Visit the Venetian Church, the Gunpowder Magazine, the Refectory, the Ossuary, as well as the grounds of the Monastery.

There is a café and gift shop outside the monastery, where you can find local honey, raki and handcrafts. Outside the fortress-like walls of the monastery are stables and a monument to the 1866 tragedy.

Close by are the villages of Margarites, Pikris and Kapsaliana, where descendants of the rebels can tell you the story of the holocaust.

Many thanks to Nikos for this beautiful atmospheric photograph of the church of the monastery (above).

Getting to the Monastery 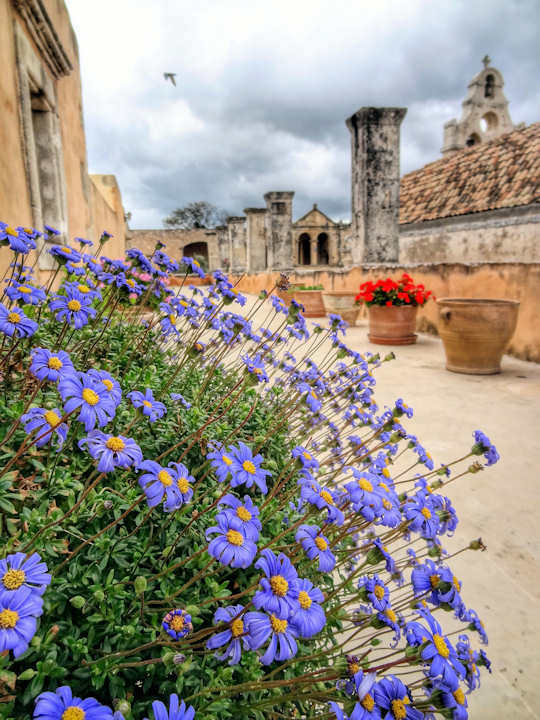 Take a day tour from Chania town or Rethymnon town to Arkadi Monastery including local villages, the countryside and a home-made traditional meal. Be led by a local guide through olive groves, hike gorges, see the monastery and bake bread in a picturesque mountain village. This is a small group tour which gives you an experience of the real Crete. 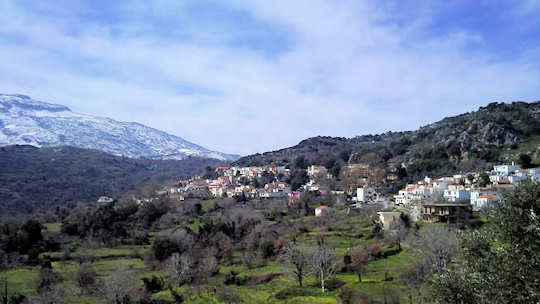 The fertile Amari Valley runs nearby which is a cornucopia of fruits and vegetables with many villages to explore. With the Psiloritis range dominating the skyline you would be forgiven for feeling in awe of the mountain views. Here grow olives, apples, cherries, vegetables, spring flowers and more, with many ancient sites, Byzantine chapels, rivulets and streams. After the Monastery, drive on to Thronos, Agia Fotini, then Meronas village then on to Kardaki, Amari and Fourfouras village.

At Monastiraki visit the ancient olive grove with trees so old they are now classed as 'monumental'. That is, they are honoured as a natural monument by the Cretan Association of Olive Municipalities. If you hear them whisper, what might they say?

There are many viewpoints and idyllic spots to stop for lunch or a picnic, so leave plenty of time to explore. Continue eastwards to Zaros and the Heraklion region or return to Rethymnon.

The Arkadi Gorge runs from the village of Pikris up to the Monastery for approximately 6.5 km.  Nearby is the archaeological site of Ancient Eleftherna and the modern village of the same name, the site containing remnants of a city from Dorian and Hellenistic times (dating from 600 BC) is a wide open site to explore without panting hordes or queues behind you, and a state of the art museum. At the base of Psiloritis and sitting amidst ravines, this is Cretan culture history at its most fascinating.

The E4 European Walking Path in Crete includes the Arkadi Monastery on its trail. From west to east, the path weaves through the countryside from Prasies then along the country road from Kavousio to the monastery. The route from Prasies to the monastery is 15.5 km, then the next route which follows the road for a short while, then deviates across country to ancient Eleftherana, is 12 km ending at the village of Margarites.

The video below is about the whole region of Amari

The video below is a very good journalistic report on the monastery.

Some beautiful images of the Arkadi Monastery below: 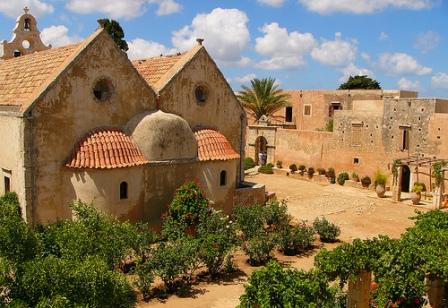 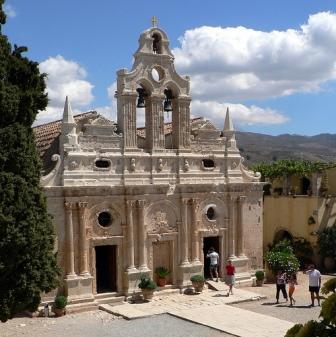 The facade of the church is designed in the Venetian style

To get to Arkadi Monastery you can arrive via Chania or Heraklion airports or port, as it is located very close to the centre of the island.

Flights arrive into Chania International Airport CHQ from many hubs in Europe, and many times per day from Athens ATH, a journey of 1 hour.

Flights also arrive into Heraklion International Airport HER from many hubs in Europe, and many times per day from Athens ATH, a journey of 1 hour.

Trying to decide which airport to use in Crete? See our airports page...

Ferries depart from Pireaus port of Athens for both Chania and Heraklion regularly, the crossing take approximately 9 hours. 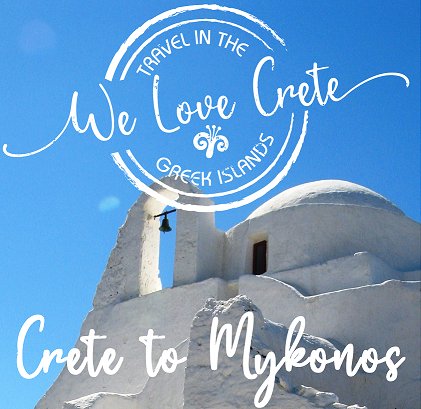