Ρέθυμνο - we love Rethymnon town. There is so much to see and do, we never stop discovering new spots. We are happy to share some of our favourites. Known for its picturesque old town and Venetian harbour, travellers will find a world of history here, in the north coast of Crete.

Ρέθυμνο is on the north coast 80 km from Heraklion, and 60 km from Chania; it is capital of the region of the same name.

Enjoy the highlights of the Old Zone of Rethymnon Town:

Rethymnon Town from across the bay 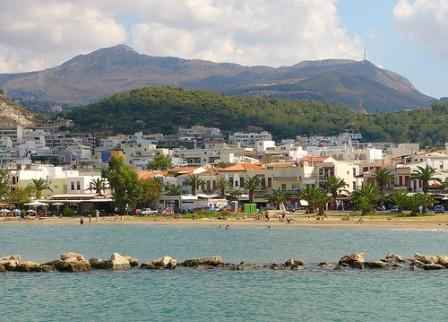 Looking across the rooftops to the hills behind Rethymnon

This town was built on the site of ancient Rithymna, part of the ancient Minoan civilisation.

After the First Byzantine period 330-824 came the years of Arab rule between 824-961, after liberation the Second Byzantine period 961-1210 after which came Venetian and Genoan rule then Turkish rule for 400 years. Liberation came again in 1898 after many terrible and rebellious years. Unification with the modern state of Greece came in 1913. 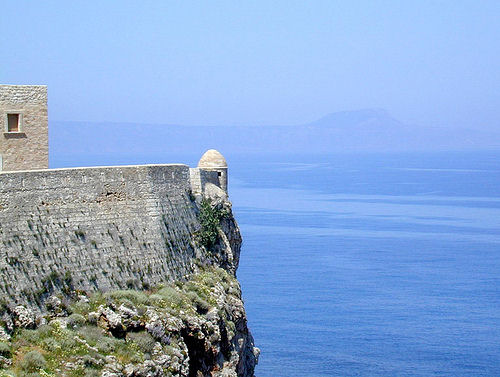 The ruins of the Venetian Fortezza overlooking the sea

The Venetian Fortress on the tip of the peninsula, is in ruins. The original was constructed in the sixteenth century. Coins from the Minoan civilization have been found on this site. We can guess that a shrine or sanctuary was located here, worshipping gods and goddesses and dolphins from the sea as depicted on the coins. 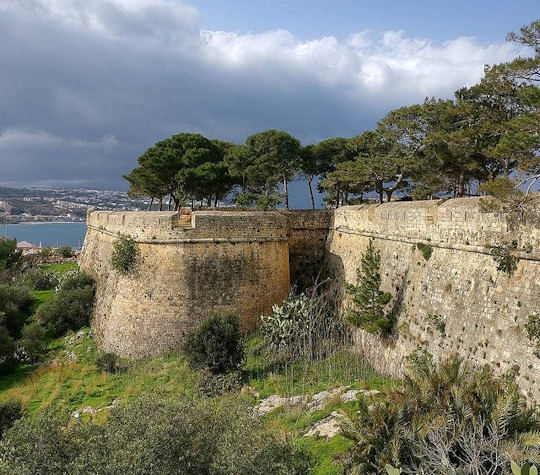 The walls of the old harbour with the Venetian lighthouse, looking to the west to the beach The first place to seek out in the old town is the Rimondi Fountain from 1626 in Plateia Petichaki. It is known as the Liondaria...the Lions.

The narrow medieval streets and the Great Gate mark the transition from the old town to the new town, dating from 1568.

The Minaret of the Neratze Mosque (right) from 1657, was built on the Venetian church of Santa Maria, and is now used as a music school.

The tight old harbour of Rethymnon with its many Venetian townhouses and restaurants is quite touristy and touts can be a little too eager, it leads on to the lighthouse, and on to the long sandy town beach to the east.

All around the old town are wonderful examples of Venetian architecture preserved in private houses.


The Venetian Loggia, from the 16th century, used to be a gentlemen’s club and is now the Rethymnon information office, is just down from the Liondaria.

All around the old town, Venetian doorways and doors in various states of disrepair can be discovered, like the one below, which is the entrance to the Veneto Restaurant. These doorways have inspired the art of the doors of Crete by Dalius Art. 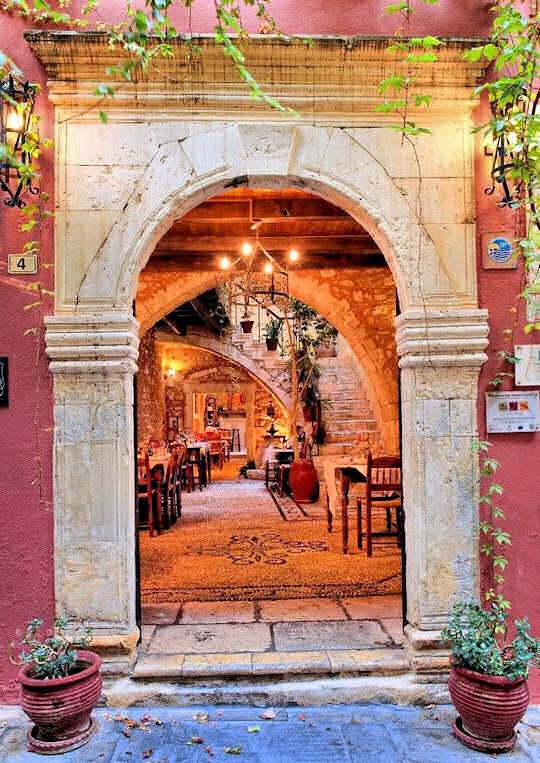 The entrance to Veneto Restaurant in Rethymnon Crete - 4 Epimenidou St 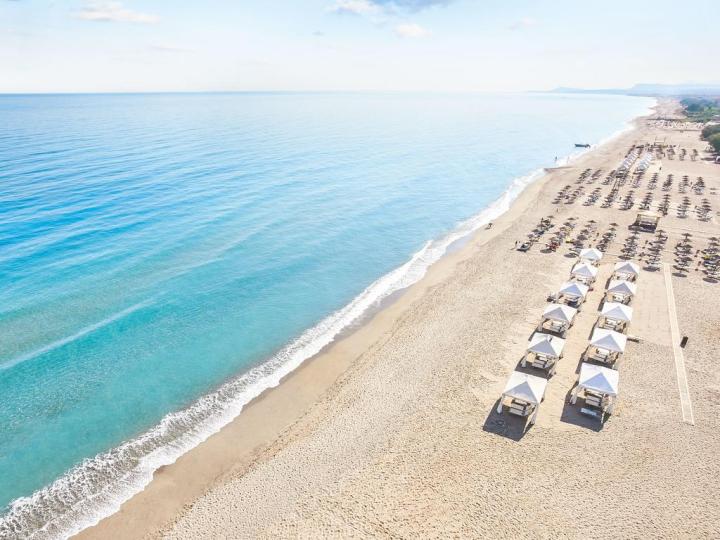 Rethymnon Beach stretches for 13 km east of the old town

Rethymnon Beach is a wide, long, sandy beach with many different types of accommodation options such as hotels, apartments and pensions, as well as beautiful luxury resorts dotted all along it.

Of the many restaurants in the old Rethymnon town, we have a few favourites including the Taverna Akri on Kornaru street, Galero Café next to the Rimondi fountain (with internet upstairs), Gounas traditional taverna, andMesostrati for music.

Taverna Gounas has traditional Cretan music and dancing and it is vital to any visitor to come and experience the Rethymniots hospitality. A skinny little joint on Panou Koroneou, don’t underestimate how serious these guys are about their music. Even in the shoulder season, this is a jumping warm-hearted place where you will meet everyone on your table. Leap into the dancing and you will never look back. Panou Koroneu 6.

We love wandering along Odos Kefalogiannidon, enjoying the café strip by the fortress at sunset.

Another atmospheric taverna where live Kritiki musiki is enjoyed by all is Mesostrati Taverna, (above) tucked away behind the church on Plateia Martiron. Giorgos Sifakis shows all his guests great hospitality, and the traditional Cretan dishes mezedes are served, alongside the tasties from the grill.

In the following video you will see Mesotratis Taverna in Rethymnon with sound track "Eklipsi (instrumental)" by Alexandros Aggelakis, then live music of the Cretan traditional style, played live. You will see the instrument named laouto played with a plectrum, by Stavros Maragkoudakis and Stelios Milonakis, who express the immortal melodies of Crete... 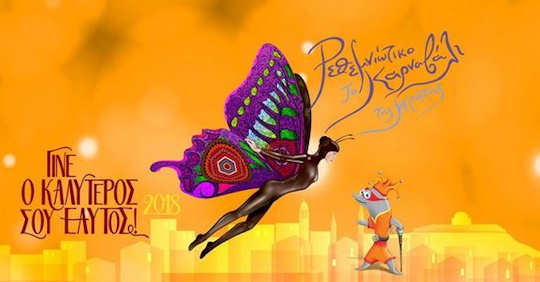 The summer program of events in June and July has a variety of events including theatre, art, dance and music. Some events are held in the atmospheric Erofili Theatre in the fortezza, some in Neratze mosque, and plenty of acts and excitement in the streets.

The proud presentation of Cretan folk music, flamenco, telling of fairy tales, cinema and graphic arts adding colour and life all around the town occurs each year during summer. The Cretan Diet Festival in July sets a bucolic scene in the Municipal Garden, with barrels full of local wine, and a program of music of international quality performances, art exhibitions and of course local food and much more. 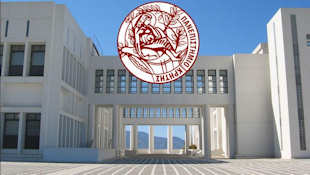 The University of Crete has a campus at Gallos, 5 km from Ρέθυμνο with faculties of philosophy, social science, economics and political science as well as education, sciences and engineering and medicine. The University if a centre of research as well as learning and has seperate campus in Heraklion. The University runs an international Erasmus program.

Pantelis Prevelakis - Παντελής Πρεβελάκης - was a poet and author born in Rethymnon town in 1908. His titles include 'The Sun of Death' published in 1959, and his most well known work is about Rethymnon 'The Chronical of a Town'. He studied law, philosophy, literature and art in Athens and Paris and was a known member of the Greek 'Generation of the 30's', recognised for his poetry, prose, drama and essays. He died in Athens in 1986, however his grave is in Rethymnon and his statue is in front of the town hall. 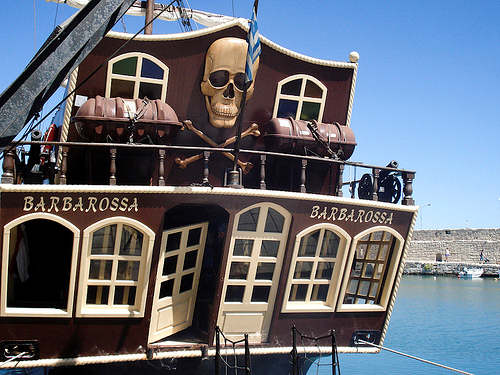 From the Venetian Harbour in Rethymnon town leaves a very special day tour with Pirate Barbarossa, AKA Dolphin Cruises. Choose from one hour or three hours cruises, fishing trips or cruises to Panormos, past dolphin waters to beautiful beaches, pirate caves and Marathi near Chania, in the beautiful Souda Bay.

Pirates were active around Crete in the 16th Century and none more fierce or wild than Barbarossa, click here to learn more about Johnny Depps's friend, Pirate Barbarossa.

Take a 3 hour Cruise on the Pirate Ship

Take a cruise on the Pirate ship from Rethymnon 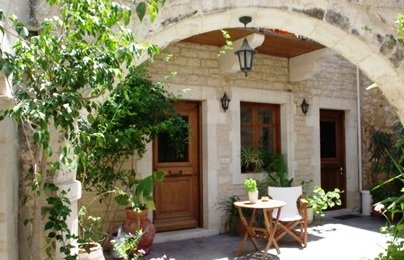 We encourage you to stay within the walls of the old town and have chosen beautiful guesthouses with charm and plenty of local atmosphere...

The interactive map below to shows our selected accommodation options in the old town... 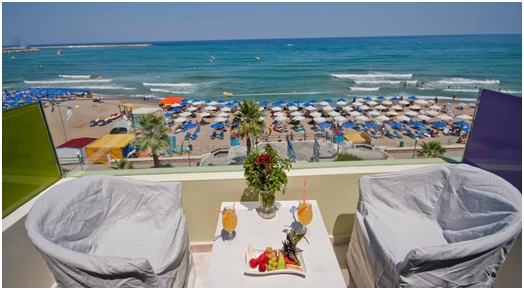 View from the balcony of Palm Beach Apartments

The Palm Beach Apartments, facing directly onto Rethymnon Beach allow easy access to all parts of town as well as being strolling distance from the old town and numerous tavernas, cafes and restaurants down by the promenade and Old Harbour.

These modern apartments are well-priced and convenient, with bright modern rooms, great service and a family atmosphere.

There is plenty to see around the prefecture of Rethymnon. Take to the hills and see the real Crete. With mountains, gorges, villages and plenty of natural interests, you will learn a little more at every step.

Triopetra Beach - a relatively undeveloped and wild beach on the south coast where you will find wide open spaces.

Below are some more beautiful images of the atmospheric old town 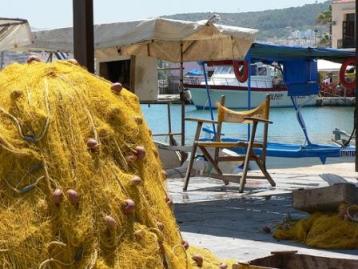 Fishing nets down by the harbour 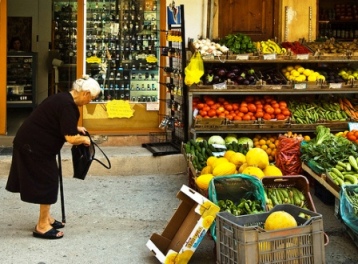 Open air fruit markets within the walls of the Old Town 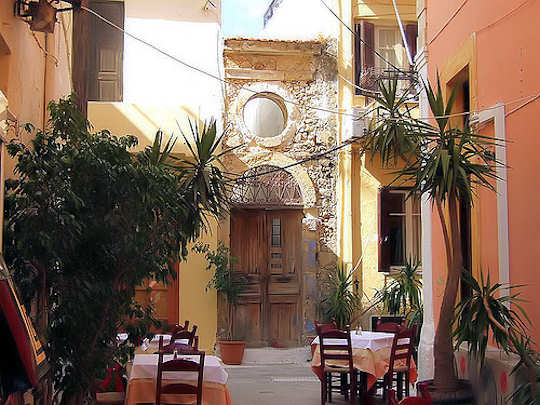 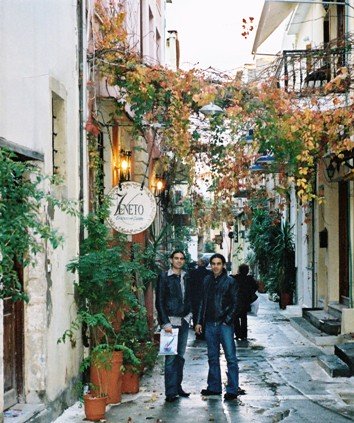 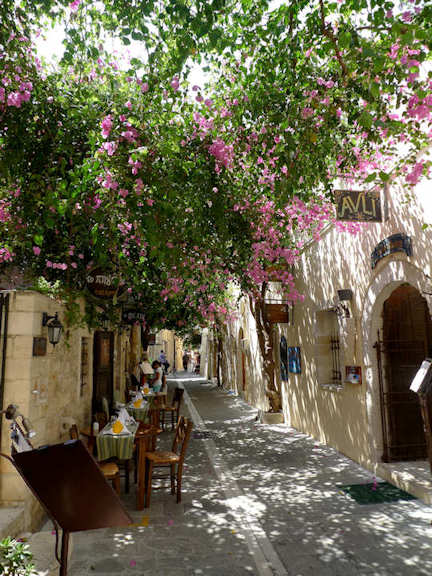