The Peaceful South of Crete 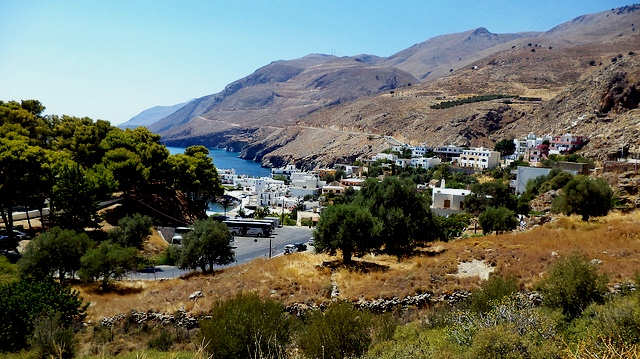 Chora Sfakion Χώρα Σφακίων is located 75 km from Chania town on the island of Crete in Greece. Located in the region of Chania, it is the capital of the region of Sfakia, a unique and proud mountainous region and people of the island. The town is also known as Sfakia.

This is a small seaside village with a big history. The history includes insurrection against invaders, in most recent times the Venetians and the Turks, and then resistance during the second World War in what was known as the Battle of Crete.

Daskalogiannis - a famous Cretan resistance leader - was born in the village of Anopolis just 10 km from this village. He is one of the proudest sons of the Sfakian region.

Today the industries are fishing, shepherding, olive production and tourism. Travellers here tend to be the more adventurous hikers and independent travellers seeking authenticity. The modern Sfakian people pride themselves on their hospitality. 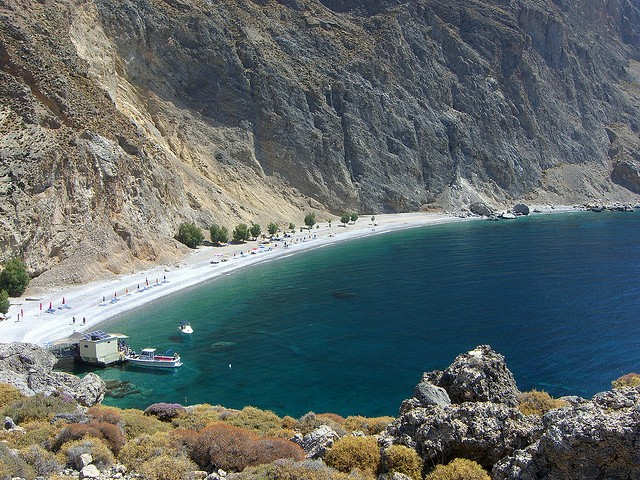 There are many beautiful, almost untouched beaches near Chora Sfakion. There is a small town beach called Vrissi, while to the west a 20 minute walk along the coastal footpath arrives at Ilingas Beach with a taverna.

A walk track further west comes out at Sweetwater Beach also with a tavern. There are many taxi boats called Delfini daily visiting to this and other beaches. Nearby also are Amoudi, Filaki, Vatalos and Frangokastello beaches.

There are naturist beaches at Sweetwater, Filaki, at the Vritomartis resort beach and Mamaris beach. 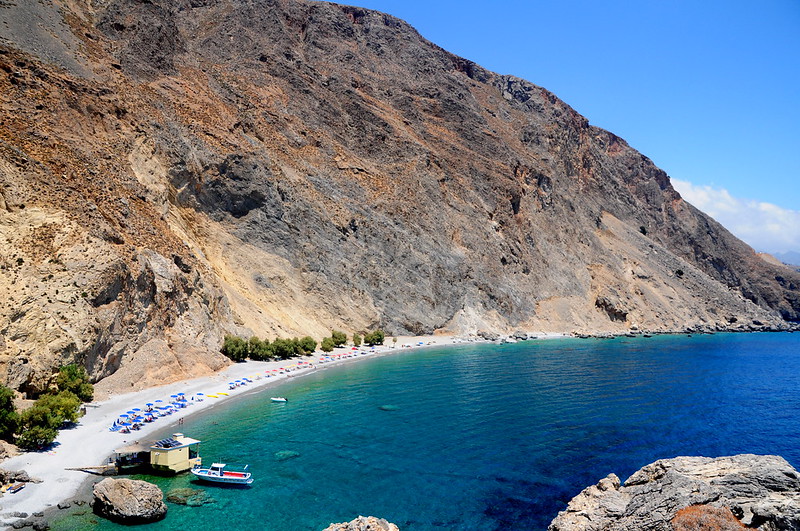 Ferries of the South Coast 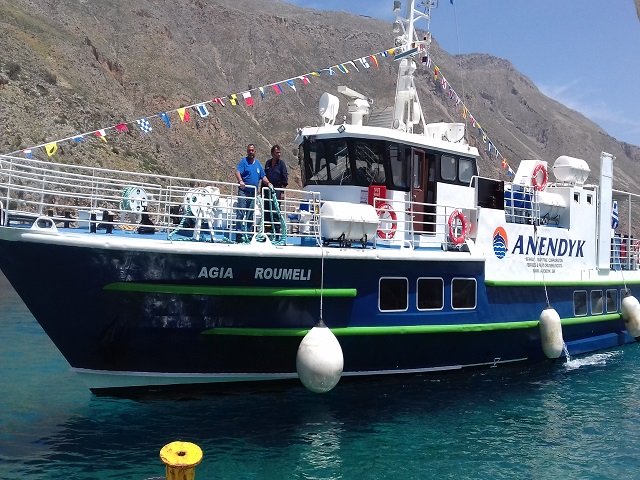 Anendyk Ferries travel along the south coast of Crete

Ferries leave here for the beaches of the south of Crete and the remote villages of Loutro, Sougia and Agia Roumeli, ending at Paleochora in the west of the island. Ferries also depart from here to Gavdos Island.

The company that runs the ferries is named Anendyk, they publish timetables online every year (see below), many visitors come through Sfakia village to take these ferries to one of the remote seaside villages, or walk along the south coast trail.

There are daily bus services from Chania town to Sfakia with KTEL, the local bus service, check the timetables as they differ in summer and winter and you will need to ensure your ferry links up with your bus. 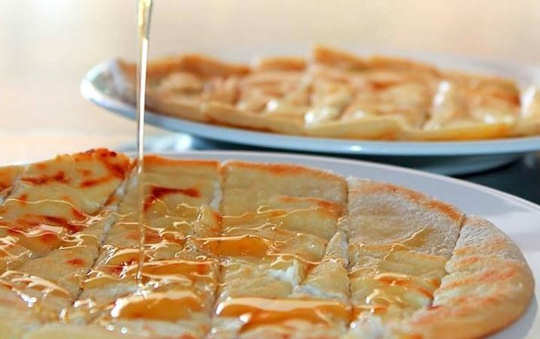 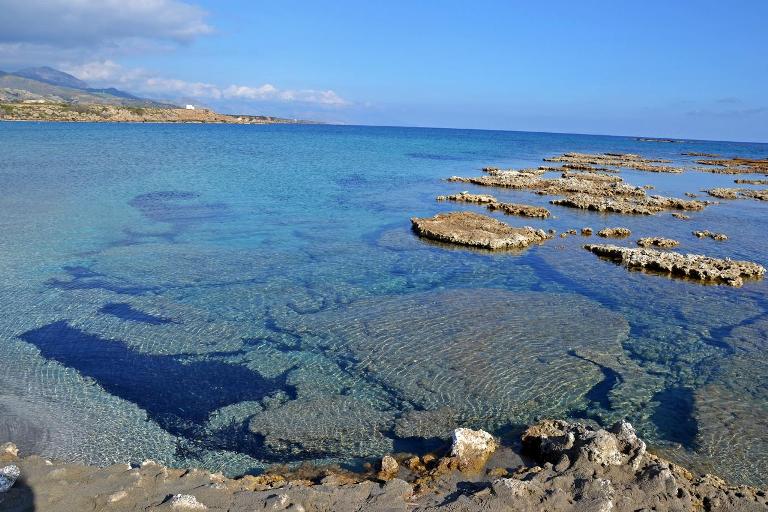 Just 15 km to the east along the coast is the beach side village of Frangokastello. It takes its name from the Venetian Castle built there in 1371, which is now in ruins.

Stories say that the castle was the site of a dramatic battle in 1828 between Cretans and Turks. Many were killed in this battle and now it is said that their ghosts rise up on the anniversary of the battle (late May to early June). The visions of the rows of soldiers are seen during the morning, at the time of the dew, so the apparitions are referred to as 'those of the dew' or drosoulites Δροσουλίτες.

Nearby villages for those wanting to explore inland and find the real character of the Cretan mountains include Anopoli, Aradena, Agios Ioannis, Asfendou, Askifou, Imbros and Kalikratis.

There are daily bus services from Chania to Sfakia with KTEL, the local bus service.

Sfakians are also well known for their dancing skills...here you see traditional Cretan music and dance group performing in front of the Xenia Hotel in Chora Sfakion, with the beautiful Libyan Sea sparkling in the background...

There is a village in Chania called Roumata and this dance is from that village, it is named the 'Roumatiani Sousta'.

This video below shows the whole region of Sfakia including the village of Chora Sfakion, the gorges and mountains, seas and beaches of this beautiful rugged area. 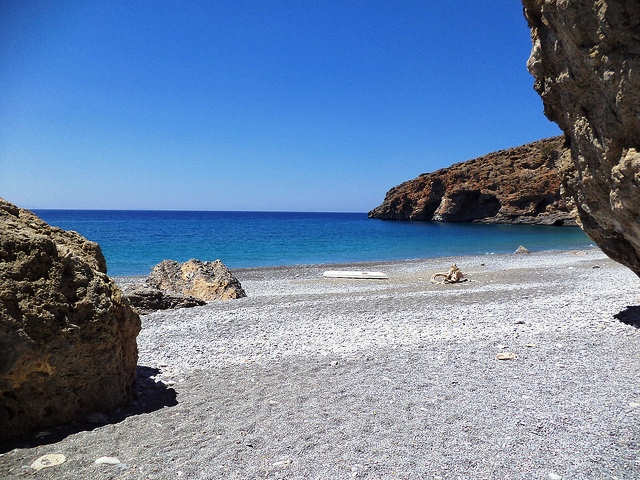 Map of Villages of Crete

See the location of Chora Sfakion on the map of Crete...

When you book with our car rental partners - Rental Centre Crete - you are supporting a local company with excellent service and an easy online booking procedure. We are sure you will be well looked after by Harry and his team. Choose from hybrid or non-hybrid vehicles.