Παλαίκαστρο Palaikastro village, also called Palekastro, is 20 km from the town of Sitia in the region of Lasithi, in the east of Crete.

Palaikastro sits surrounded by olive groves, grapevines and gardens in a hilly rugged part of the island. Above the town and between its two beaches is a curious flat-topped hill called Kastri. It gives a special character to the village and the beautiful bays.

There are plenty of cafés serving good food, and a local kafenion that is very authentic. There are lots of rooms, domatia and pensions dotted in and about the town, and good local bus services.

The people of Palaikastro village are proud of their Cretan heritage and local traditions, there is a unique restored Cretan house fully refurbished and decorated as a folkloric museum. It contains 20th Century artifacts and shows the traditional way of life of Kríti, and is open from April to October.

Locals still work at agriculture with olives, grapes and fishing. So locally they produce great olive oil, wine and the meals to go with them, and offering hospitality in their hotels and tavernas. 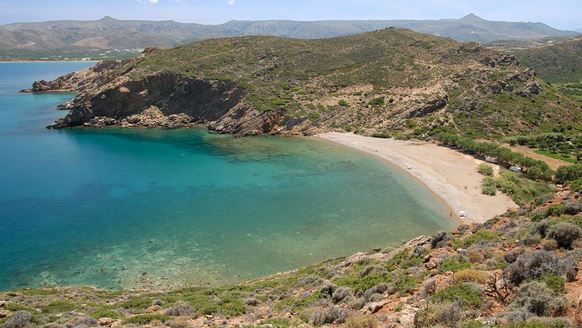 Between the village and the bay is the ancient Minoan site of the township Roussolakkos. This township has been dated back to 2000 BC and was the second largest Minoan township after Knossos. This is a significant historical site. So many beautiful pieces have been retrieved from the site, that show the activities and lifestyle of these ancient Cretans. 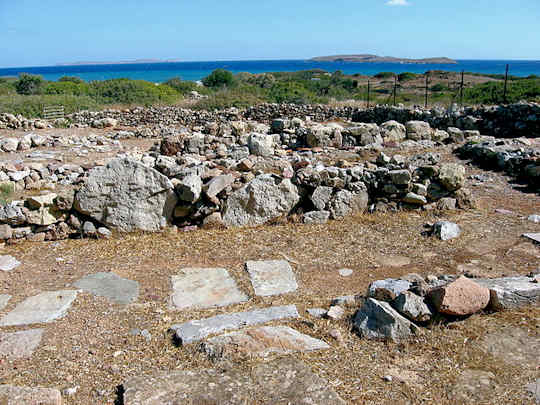 The islands of Elasa (on the left) and Grandes (on the right), from Roussolakkos 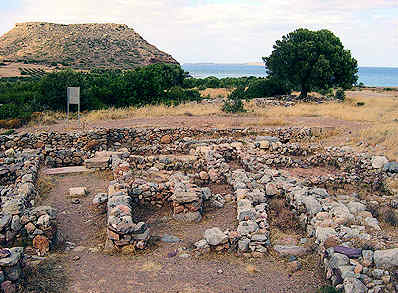 One of the most significant finds of modern archaeology was uncovered here in 1986. A small statuette, nicknamed the 'Palaikastro Kouros', meaning the Palekastro Boy, is a beautifully carved small figurine made from hippopotamus ivory and gold.

The recovered statuette shows marks of desecration and burning. The figure came from the Roussolakos Minoan site and has been dated from 1425-1480 BC. This remarkable figure is on display at the Archaeological Museum of Sitia.

There are many accommodation options in the area including small pensions, family-run guesthouses and villas.

The beaches of Chionia and Kouremenos, just 2 km from the town, are pretty sandy beaches, drawing visitors for their clear waters, great diving, fresh seafood and wind-surfing. There is a wind-surfing school and club based here.

3 km  east from the centre of the village, directly behind the beach of Chiona is the ancient Minoan site of Roussolakos (see below).

There is a pretty yet intermittent lagoon wetland behind the beach of Chionia which is used by migratory birds, try spotting swallows, warblers and goldfinches.

The ancient city of Itanos dated from 1500 BC is 3 km north of Vai, and there are three beautiful sandy beaches to explore, with trees for shade.

Karydi is a high mountain village 15 km from Palaikastro, well worth a visit as it keeps itself intact over many years, with beautiful white houses and mountain scenery. Close by is the cave of Peristeras is one of the noteworthy caves of the area, the large cavern is 80m by 35m adorned with stalactites and stalagmites.

About 10 km from the village is the 15th century Monastery of Toplou which is famous for its fort-like architecture and its role in the underground resistance against the Turks and later the Germans. The monks hid resistance fighters and were killed for their involvement.

The Gorge of Chochlakies about 6 km from the village is a pleasure for nature lovers and takes a couple of hours to walk, ending in a pristine beach, it doesn’t get more natural than this.This is part of the E4 Walking Path of Crete.

20 km from the village is Zakros Gorge and upper and lower Zakros villages. This is one of the most dramatic gorges in Crete, ending at the beautiful beach of Kato Zakros and close to the Minoan ruins of Zakros Palace.

From Paleokastro village it is 75 km to Ierapetra, one of the major towns in eastern Crete, and the port for departures to Chrissi Island.

Below you will see the location of the village on the map in the far east of Crete...

Below you will see more beautiful images of the village and the area... 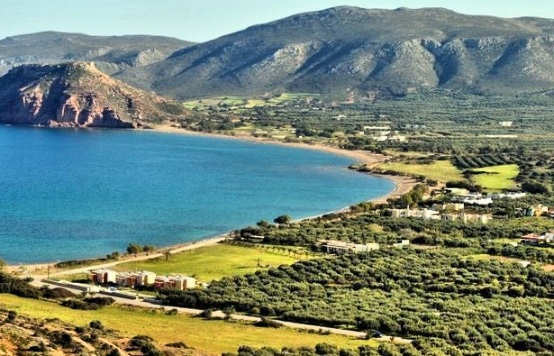 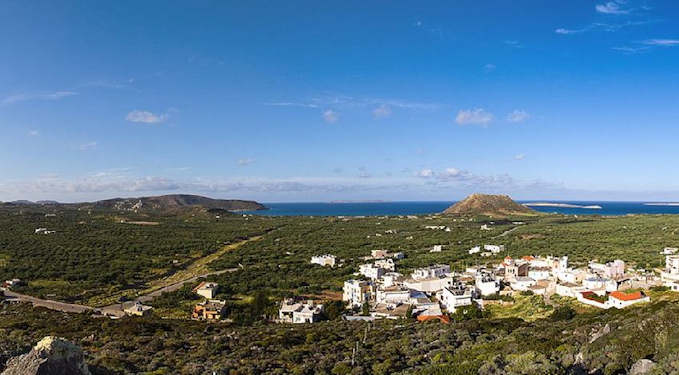 Enjoy the beaches and country around Palaikastro on this video made by Vasilis and Nikos...

Looking around the region...a lyrical video which captures the feeling of this part of Kriti...

Get to Heraklion International Airport with a 1 hour flight from Athens with Olympic Air or Aegean Airlines.

Take a hire car, taxi or bus to the Palaikastro. It is 150 km from Heraklion. Drive east on the national road via Agios Nikolaos and Sitia.

More details about flights and ferries to Crete below.