Famous Crete. These are some of the notorious, well-known, well-loved, talented or controversial figures of Crete, both from history and modern times. On our trivia pages we take a more light-hearted look at celebrities connected to Crete.

El Greco - painter, sculptor and architect of the Renaissance, came to fame in Spain of the sixteenth century.

Domenikos Theotokopoulos was born in Crete in 1541, studied and became a master painter in Iraklion as part of the Cretan School of art, flourishing in Post Byzantine culture.

Theotokopoulos became known as "El Greco" when he went to study in Venice and later Rome in Italy, then to Madrid and Toledo in Spain. 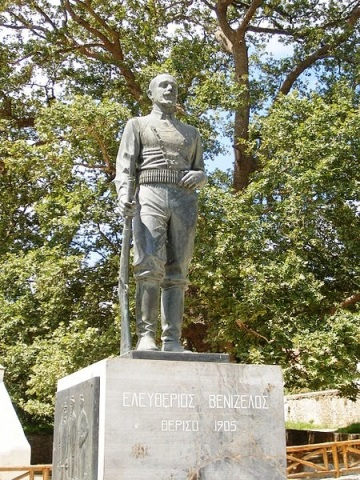 Statue of Eleftherios Venizelos at Theriso - remembering the uprising of 1905

Eleftherios Venizelos Ελευθέριος Βενιζέλος 1864 - 1936 was a political leader and statesman born in Crete in Chania. He lead many uprisings for freedom for the Cretan people and went on to become Prime Minister of Greece in 1915.

Nikos Kazantzakis... poet, novelist, essayist and playwright is one of Greece’s most famous writers.

Kazantzakis Καζαντζάκη wrote many diverse works, including the novels for which he is commonly known.

Kazantzakis was an existentialist, to say the least. Having being born during a period of such hard times in Crete, Kazantzaki explored the human existential experience in his work. 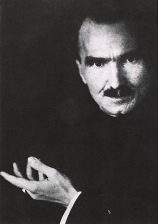 Regardless of being born into a farming family in Crete, Nikos began his schooling at the Franciscan school of the Holy Cross on the island of Naxos during the Cretan revolt of 1897. He then went on to study law at Athens University and continued his studies in Paris where he studied philosophy until 1909.

During 1912–1913 Kazantzakis volunteered to fight with the Greek army in the Balkan Wars, during this period Kazanzakis was very patriotic to Greece, his country of birth.

After the Balkan wars, Nikos began travelling in 1912 through Europe, the East and Asia. He continued to travel for the rest of his life. During his travels, Kazanztakis delved into the cultures he came across. He explored communism, Buddhism, the writings of Nietzsche and Bergson.

Constantly questioning traditional western religion and sociology, Kazantzakis, through this international cultural experience, developed universal ideologies. Kazantzakis grew away from his Greek nationalistic ideals during these years of his life.

Beginning in 1906, Kazantzakis wrote essays and plays, during his travels he fashioned philosophical texts. He published a modern sequel to Homer’s Odyssey in 1938.

Most of his life Nikos was not recognized for his genius as he published his work in Greek. Because of this Nikos resorted to writing novels, Greek primary school texts & translations of European works. It was only when Nikos published his novel at the later end of his life that he became internationally recognized.

He died of leukemia in 1957 in Germany after visiting China & Japan. By reading any of Kazantzakis works one cannot help but awaken the universal desire to achieve freedom in one’s life.

Nikos Kazantzakis is beloved by Cretans everywhere, contributing to famous Crete, and the international airport at Heraklion has been named in his honour.

Some quotes from his writings:

“He loved Crete like a living, warm creature with a speaking mouth and weeping eyes; a Crete that consisted not of rocks and clods and roots but of thousands of forefather and foremothers who never died.” Freedom & Death - Καπετάν Μιχάλης

“Four hundred and thirty six years have now gone by since I was killed. I lie beneath the earth & await for justice."  Freedom & Death - Καπετάν Μιχάλης

Following is a chronologic list that covers most of Kazantzakis’ work. 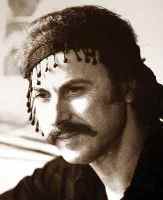 Nikos Xilouris Νίκος Ξυλούρης 1936-1980 was a musician and hero of the Cretan people. His voice and lyra music touched the hearts of Cretan and Greek people all over the world.  See more about his life and music here... 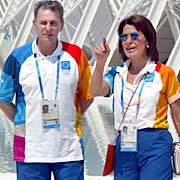 Gianna Angelopoulos-Daskalaki is a famous Greek politician and business woman who was born in Heraklion, Crete.

Seen here organising the Athens 2004 Olympics with Jacques Rogge, the President of the International Olympic Committee.

Who is this powerful and successful woman of Greece, a modern woman of famous Crete?

Gianna Daskaláki was born to simple means in Heraklion in 1955, her mother was a cleaner and her father was a warden. She focussed on her studies and became a top student. Then she studied law at the University of Thessaloniki. In Athens she was elected as a municipal councillor then as a member of parliament in 1989 and 1990, on the side of the conservative New Democracy party.

In 1990 she married Theodore Angelopoulos, a Greek yachtsman and entrepreneur. She retired from politics and contributes to his shipping business, they also have three children. She is a member of the Athens Bar Association. In 1994, she was named Vice-Chair of Harvard University's John F. Kennedy School of Government.

In 1998 she was appointed Ambassador at Large for Greece. In 2001 she was ranked among the top 50 women managers by Forbes and Fortune magazines.

Gianna and Greece's outstanding success with the Olympic Games has inspired people all over the world, and why she is a part of famous Crete. In particular, Greece was being watched intensely and many anticipated she would fail at the delivery of the games. The infrastructure of Athens, the transport networks and many other aspects of the games, put a lot of pressure on Greece, especially after increased terrorist attacks around the world.

Gianna said "We wanted the Games to unify the people of Greece; to instil within us a new sense of pride; to push our economy ahead; and to make our capital city a more beautiful and liveable place. We asked that these Games resolve, once and for all, what I have called 'The Greek Paradox.'" With this achievement she has become a part of famous Crete.

"Personally, I am most inspired by the way Greeks of every background came together in pursuit of a single goal," she added. "This unprecedented unity, in the face of extraordinary pressure, is the surest proof yet that the Greek Paradox is rapidly becoming a relic of an earlier age." Quoted from a speech at Harvard University in 2005.

At that time she and her husband contributed to a new professorship in Public Health and International Development at the university.

In the very male-dominated political and business world of Greece, Gianna is a powerful role model for Greek women and a change agent for the country. Greece frequently ranks at the lower end of female representation in politics, trade unions and government amongst the European nations. Many rumours exist about Gianna becoming the President of Greece.

No matter about party politics, everyone enjoyed the Athens Olympic games and every Greek everywhere around the world was proud of the achievement. Now Greece has shown the world and herself what modern Greece is capable of, and she is evolving into a thriving modern European nation, shrugging off the economic ties and wounds of the 20th century and expressing her freedom in the 21st century.

Heraklion, which was part of famous Crete as a proud Olympic city during the games. 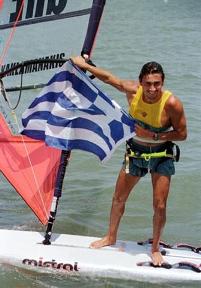 Nikos Kaklamanakis Νικόλαος Κακλαμανάκης lit the flame at the Athens 2004 opening ceremony. He is a proud Greek athlete, a medal-winning sailor and windsurfer. His father Theodoros Kaklamanakis is from Rethymnon in Crete.

He is a champion in Mistral class windsurfing, winning gold at Atlanta in 1996 and silver at Athens in 2004; just the highlights of a long and fascinating career as a sportsman.

He is sponsored by Alpha Bank, Puma and Jeep, and competed in China for the 2008 Olympics.

He spent holidays in Crete in September 2008, at a secret, isolated windsurfing spot.

If you are looking to learn more about the notorious people that have shaped Crete and Greece, we have some reading suggestions and more about Kazantzakis here...