Crete Books is proud to present one of the most well known writers of Cretan literature, Nikos Kazantzakis, and to show travel memoirs and modern historic novels which weave the threads of time into a contemporary understanding of this most complex island...

Kazantzakis was an existentialist, to say the least. Having being born during a period of such hard times in Crete, Kazantzaki explored the human existential experience in his work.

Regardless of being born into a farming family in Crete, Nikos began his schooling at the Franciscan school of the Holy Cross on the island of Naxos during the Cretan revolt of 1897. He then went on to study law at Athens University and continued his studies in Paris where he studied philosophy until 1909.

During 1912–1913 Kazantzakis volunteered to fight with the Greek army in the Balkan Wars, during this period Kazanzakis was very patriotic to Greece, his country of birth.

After the Balkan wars, Nikos began travelling in 1912 through Europe, the East and Asia. He continued to travel for the rest of his life. During his travels, Kazanztakis delved into the cultures he came across. He explored communism, Buddhism, the writings of Nietzsche and Bergson.

Constantly questioning traditional western religion and sociology, Kazantzakis, through this international cultural experience, developed universal ideologies. Kazantzakis grew away from his Greek nationalistic ideals during these years of his life.

Beginning in 1906, Kazantzakis wrote essays and plays, during his travels he fashioned philosophical texts. He published a modern sequel to Homer’s Odyssey in 1938.

Most of his life Nikos was not recognized for his genius as he published his work in Greek. Because of this Nikos resorted to writing novels, Greek primary school texts & translations of European works. It was only when Nikos published his novels at the later end of his life that he became internationally recognized.

He died of leukemia in 1957 in Germany after visiting China & Japan. By reading any of Kazantzakis works one cannot help but awaken the universal desire to achieve freedom in one’s life.

"He loved Crete like a living, warm creature with a speaking mouth and weeping eyes; a Crete that consisted not of rocks and clods and roots but of thousands of forefather and foremothers who never died. "

"Four hundred and thirty six years have now gone by since I was killed. I lie beneath the earth & await for justice. "

Following is a chronologic list that covers most of Kazantzakis’ work.

Crete books as travel memoir - there are many different approaches to life in Crete from an outsider's perspective.

In this genre of travel narrative or travel memoir, we often see the powerful effect of Crete and Cretan life on travellers or seekers, drawn to her from many miles away.

Whether life-changing or smooth sailing, humourous or lyrical, many have shared their experiences, poetry and philosophies about Kriti.

Which is your favourite? Do you have a special connection to a story about Kriti? Let us know at Crete Books on the contact form.

• 2003 - The Taste of Honey, Crete on the Half Shell by Byron Ayanoglu

• 2008 - The Golden Step: A Walk Through the Heart of Crete by Christopher Somerville

Crete's fascinating history has inspired many novels of drama, love and intrigue interwoven with accurate events...

Landscaper to the very rich - Alex Dingwall-Main chronicals the consultancy of a lifetime - 'find the oldest living olive tree'. His search takes him all over the Med, including to Crete. A light and fun read...

Review of 'The Island' 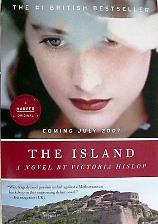 Review for Crete Books from Elisabeth of Bavaria

I'm sure, many people know the 'old' book "Winds of Crete" (1974) by David MacNeil Doren. There is a rather new one, written by the English author Victoria Hislop, (meanwhile also translated to German):

"The Island" - here's the copy of a recension I've found: "When beloved schoolteacher Eleni is diagnosed with leprosy, she is exiled to the Greek island of Spinalonga.

Left behind on Crete are her husband and two beautiful daughters, headstrong Anna and dutiful Maria. Years later, Eleni's great-granddaughter Alexis returns to Crete to find answers to her family's mysteries. Conveniently, a witness to her family history is still alive to tell her - and us - the dark story".

The novel is a romantic page-turner, but I found it a little shallow. For example, the Nazi occupation of Crete becomes a plot device to turn the boy next door into a hunk, and, after much tribulation, the good are rewarded and the bad punished.

It's not so bad to read this book, to understand what happened just half a century ago there, where now so many tourists enjoy the beaches!!!

Remember, it has been just a few years ago. Reading this book I've been touched deeply!

See more about the island of Spinalonga and this novel here...