How to Learn Greek

How to Learn Greek - in Greece, on Crete and other Greek islands, and in the capital, Athens.

Katia has been learning Greek for many years, and she even has a Cretan accent! Her Greek is pretty good, but she gets confused sometimes, and might say stafilia grapes instead of filakia kisses. Now we often say goodbye with fruit, and we have progressed through achladia pears, mandarinakia mandarins, and mourakia berries through to karpousia watermelons. That's a whole lot of kisses right there!

One of her favourite Cretan words seems to be tsikoudia, whether this is because it has a rocket launch sound to it, or because she likes drinking it with us and friends, we don't know. Anyway, she has a few ideas to suggest if you want to learn Greek...

The joys of communicating in Greek are endless. Did you notice every Greek is a philosopher? The kafenion really is the 'university of life' and you will learn more there in an evening than you expected, once you can understand Greek.

There are plenty of places to learn Greek in Crete, apart from the local kafenion, the hardware store and over coffee with your friends in the village.

The first idea is to find someone in your village who speaks English and Greek and is willing to swap lessons. This is always my favourite way to learn a language and provides enless fun and friendship.

If you cannot find anyone to swap with, just put the word out through your neighbours and at the kafenion and be patient, someone might show up when you least expect it.

In the meantime, there are formal Greek classes to be found in Crete as outlined below.

How to Learn Greek - In Athens


How to Learn Greek
In the Greek Islands 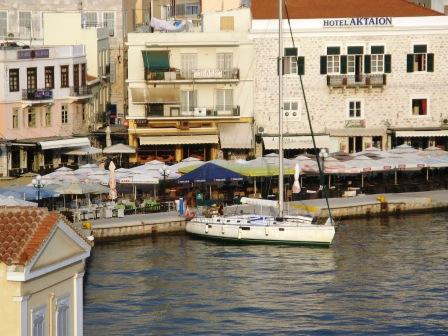 Ermoupolis Harbour on Syros, you can learn Greek here with Omilo

There is nothing like two weeks on a Greek island with intensive language classes to get your Greek flowing.

I can highly recommend the Omilo team, and their island classes in Syros. Syros is a beautiful island in the Cyclades, close to Mykonos, Tinos, Paros and Naxos and holding a beauty of its own. Learn Greek next to the beach at Azolimnos and relax in the beautiful town of Ermoupolis (pictured above) at lunch and in the evenings. 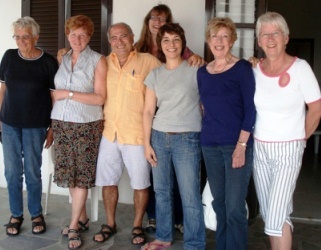 How to learn Greek - together! 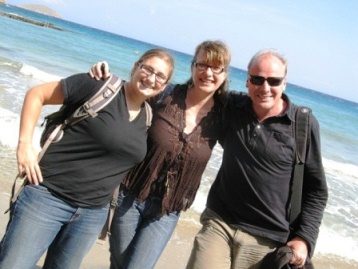 Just a few steps from our 'classroom'

We stayed in a lovely little seaside town called Azolimnos, and enjoyed many taverna dinners, historic walks in Ermoupolis the capital, and other Greek cultural activities. 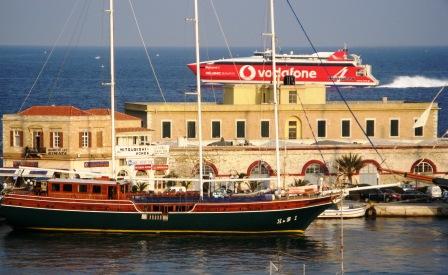 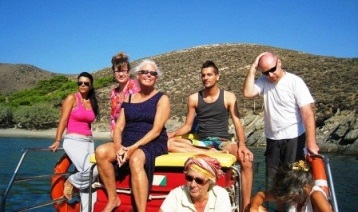 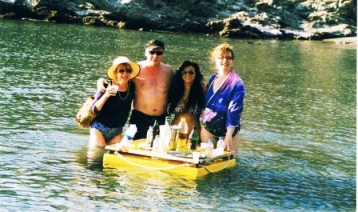 Its hard to learn Greek but someone has to do it!

We enjoyed the many beaches of Syros and the crystal clear waters. In September we virtually had the beaches to ourselves. We left from Galissas for a boat trip to the wild inaccessible western beaches.

Meeting up with a crazy bunch of foreigners from all over the world was so much fun; our taverna dinners were punctuated with accents and exclamations from many diverse languages, as well as full of delicious local food.

Yes! We did learn some Greek too!
Here we are during the graduation ceremony! 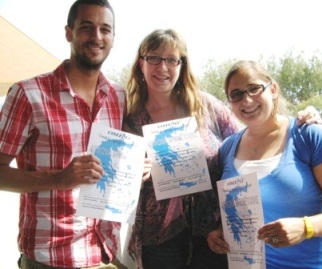 Graduating from Greek classes in Syros

See more of our photos of Azolimnos, Syros and the Greek language classes: 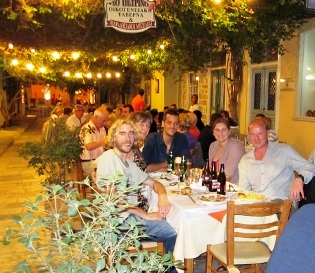 See comments from students of Omilo from all around the world:


How to Learn Greek
At Home

Do you want to learn Greek before you depart on your holiday or business trip? See our page about learning Greek from home with plenty of suggestions for interactive software language learning packages, and online learning.