A Sanctuary in the Mountains 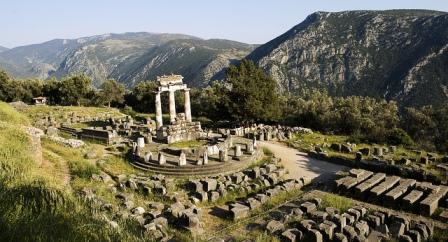 Delphi Greece was famous in the ancient world; it retains that fame today. The notorious Oracle of Delphi changed history; among those who sought wisdom there were kings and princes.

Delphi today is a ruin of an ancient civilisation, with just as many visitors making the long journey into the rocky, windswept mountains to touch some of the magic that appears to be lingering in the very stones of the place.

"As I walked the streets of Delphi I felt the unexpected beauty, I felt a peaceful, esoteric familiarity with this wild inaccessible landscape.

It was certainly exciting, yet gloriously simple. I felt an ease and tranquility". 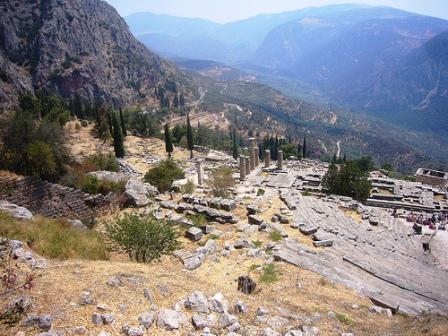 The ruins of Delphi

The ruins of Delphi are located on the slopes of Mount Parnassus looking over the Corinthian Gulf, on the mainland of Greece, 165 km west of Athens.

This extraordinary location on the slopes of Mount Parnassus was, no doubt, chosen for its spiritual essence, which remains today.

The modern village of Delphi has grown to accommodate visitors from all over the world who come to explore history, and also ski, walk and climb in the mountains. Both the archaeological site and the new village are on the steep slopes of the mountain, so bring your walking shoes.

The site is extensive and so important and beautiful that it is now protected by UNESCO. There are temples, a theatre, a stadium, fountains and so many stories to tell. The sanctuary and oracle were worshipped as a female deity cult as early as the 8th century BC.

The Sanctuary of Athena Pronaia (above, top) is one of the most striking structures remaining on the site today. Known as the tholos, it was made of 20 dorian columns, of which three are still standing, and inside were 10 corinthian columns. This spiritual centre was thought to be built in the 6th Century BC. 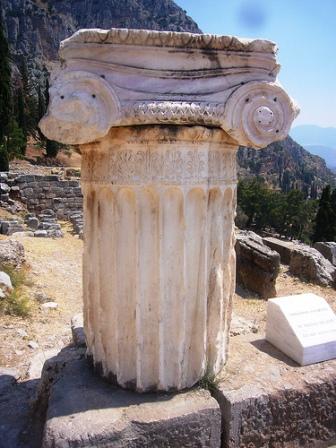 Many of the artifacts recovered from the ruins at Delphi are in very good condition, some are located on site, many are located in the museum in modern Delphi.

The early stories of this woman speaking in frantic nonsense atop Mount Parnassus were told in the oral tradition. Much of the truth of the spiritual practices in Delphi is now lost. Conjecture and fables make up the rest.

The oracle was a woman chosen from Delphi known as the Pythia. The woman sat above a crevice in the mountainside from which vapours wafted, causing her to rant and rave. Her words were then translated by the priest of the temple of Apollo for the benefit of the seeker.

Writers of Greek history who tell the stories about the Pythia include Aeschylus, Herodotus, Thucyclides, Euripides, Sophocles, Plato and Aristotle. From these stories we know that many important historic figures from 700 BC to the 3rd Century AD consulted the oracle.

Modern scientists have discovered evidence of hallucinogenic gases rising from a nearby spring and preserved within the temple rock.

Getting to Delphi Greece 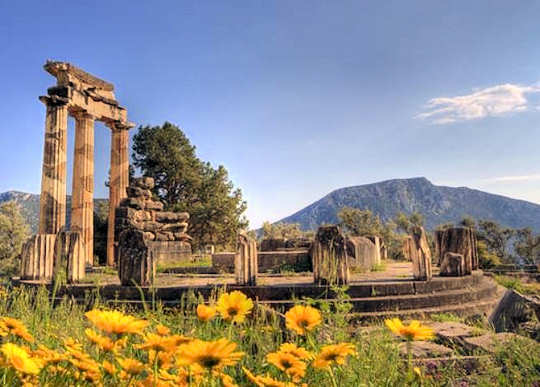 Tours - there are several day tours to choose from, departing from Athens daily for Delphi Greece. If you are short on time or on your way to Crete, we suggest this no-fuss option.

Driving yourself - (see route map above) is well worth the trip, as the mountain scenery is wonderful, and there are many small hotels and guesthouses with local character to choose from in modern Delphi Greece. Leave 3 hours for the drive, it is 160 km or a 2 hour drive and leave time for the unexpected. This makes it theoretically possible to return in one day from Athens but this is not recommended.

You could choose to drive down the mountain-side and stay at one of the small fishing villages on the Corinthian Gulf, such as Itea, Kirra or Galaxidi, see suggestions for accommodation below.

Delphi Greece Bus - several local buses depart from Athens daily. The bus trip takes about 3 hours one way. Leave a full day if you want to visit from the city. Buses depart from KTEL Bus Terminal B on Liossion St. To get there take the metro to Attiki then the bus towards Liossion. From the airport take bus X93 or prebook an airport transfer here.

The same company - KTEL Fokidas - has buses depart from Patras daily for Delphi, so if you are coming in from Italy this is the most direct route to Delphi.

There are no trains from Athens to Delphi.

From Crete - if you are visiting Crete from overseas, it is best to fit in your visit to Delphi when you are in Athens. In which case, leave 2-3 days to see Athens then one day for a day tour to Delphi as listed above. You can do this on your way to or from Crete. To get to Delphi from Crete, you can depart from Chania CHQ or Heraklion HER airports on a 45 minute flight to Athens ATH, take a taxi to the Bus Terminal B and take a coach to Delphi Greece, or transfer into the city, stay a night and then join a tour the next morning.

The museum is located at the entrance to the historic site - it is an extensive collection and well worth a visit to put the ruins in context - entrance is approx. €12 which includes entrance to the site. Always check the opening times here on the government cultural website or with your hotel, as times can change with the seasons.

The collection includes several unique artefacts which were discovered on the Delphi archaological site and restored - such as the incredibly beautiful Sphinx of Naxos dating from 560 BC and the Twin Kouros statues dating from 580 BC. Exquisite ceramics and figurines show a rich cultural life from ancient times. 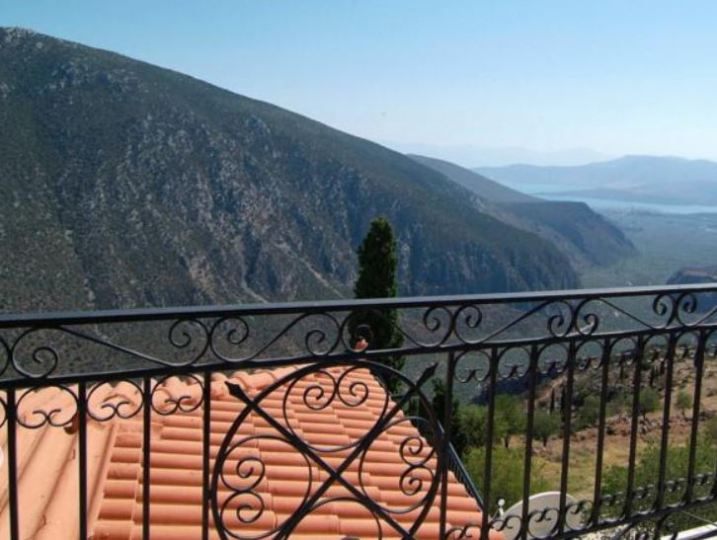 Stunning views from Delphi Town - over rooftops to the Corinthian Gulf 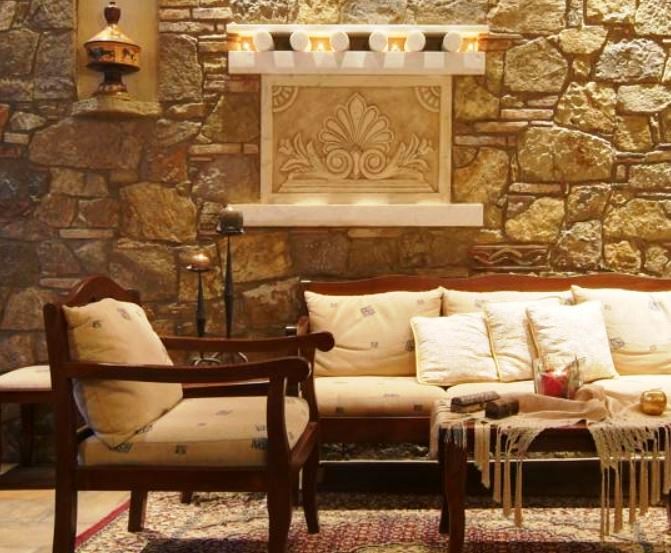 The Artemis (above) is in the very centre of town and within comfortable walking distance to the museum and the ruins. A pretty neo-classical building which has been restored and exudes character, within the historic quarter of Delphi Greece. 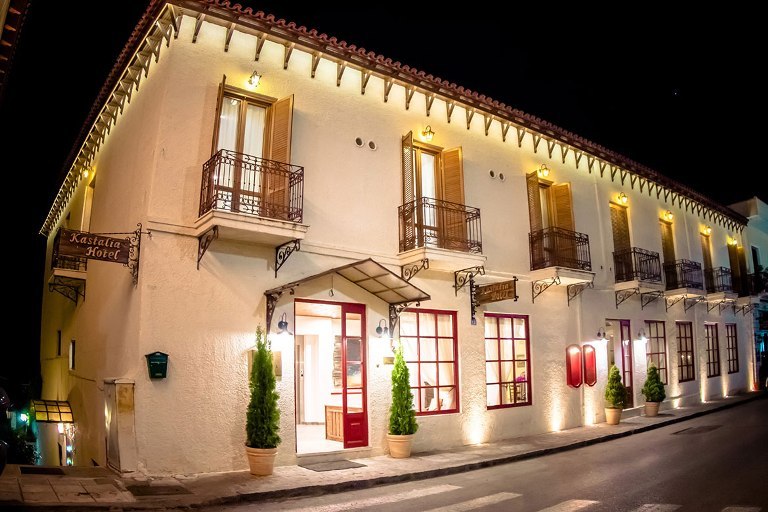 The Kastalia Boutique Hotel in the old town of Delphi is a beautiful and comfortable hotel to choose as your base to explore the ruins. With expansive views to the Corinthian gulf and excellent, friendly service, this is our pick for Delphi Greece. 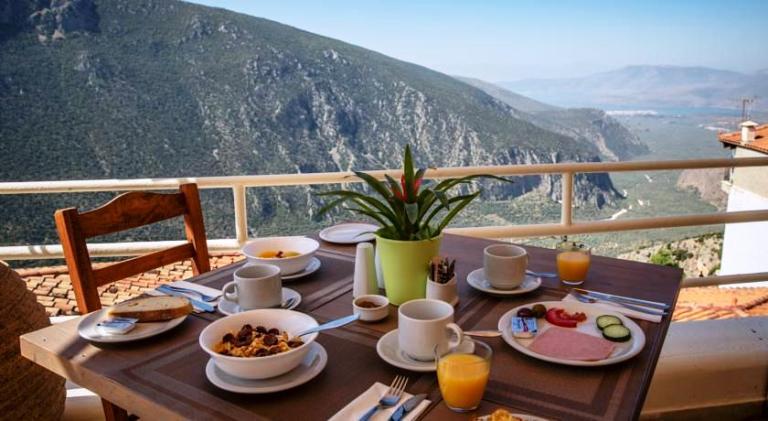 Just 18 km from Delphi on scenic mountain roads is Itea, a small seaside village, a little around the bay, 19 km from Delphi is an even smaller village, Kirra. Both of these make wonderful stops after seeing the ruins at Delphi.

Further on, just 34 km from Delphi is the picturesque village of Galaxidi, a characteristic historic village which makes the perfect place to stay after being in the mountains. 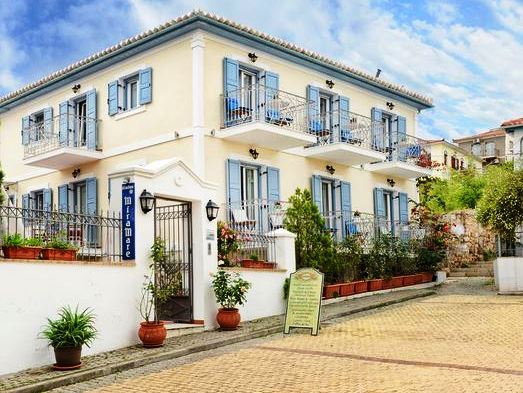 The Mira Mare (pictured above and below) is a neo-classical home renovated into a stylish pension, with wonderful water views and a great location in Galaxidi. Relax in style after your day contemplating the mysteries of the oracle. 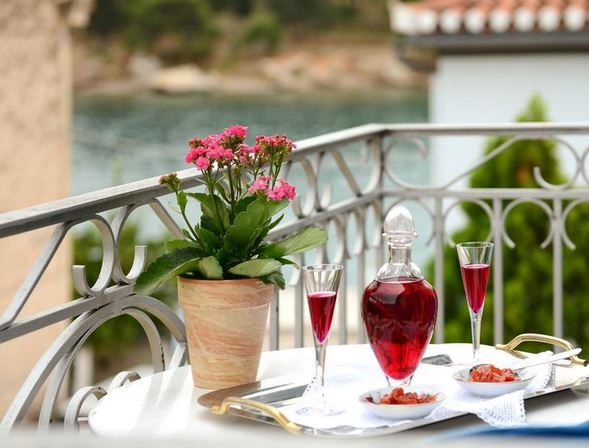 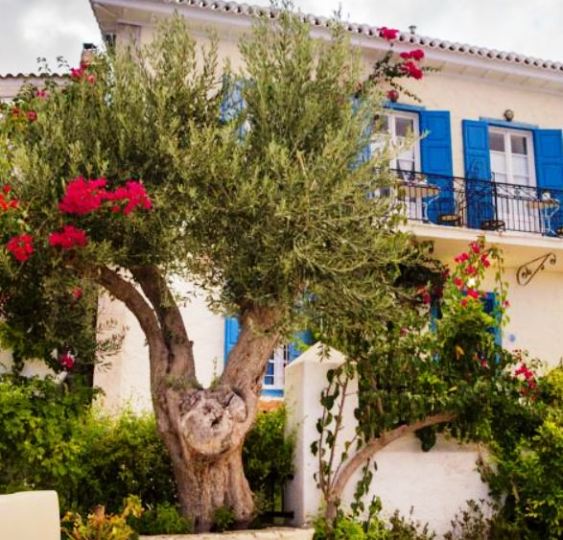 The Galaxa Mansion (above and below) is also located near the waterside and has delicious views over the gulf. This is relaxed and affordable yet comfortable pension in an attractive building of the local architectural style, with views across the harbour to the beaches and forests just south-west of the village. With only 1 km to the beach, plenty of cafe bars and restaurants nearby, this is a beautiful and practical hotel in Galaxidi. 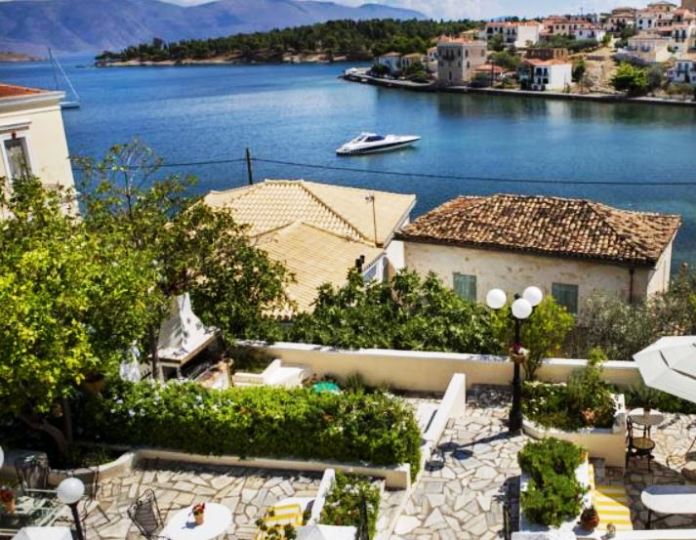 Galaxa Mansion in Galaxidi, makes a relaxing choice of accommodation after viewing the ruins of Delphi 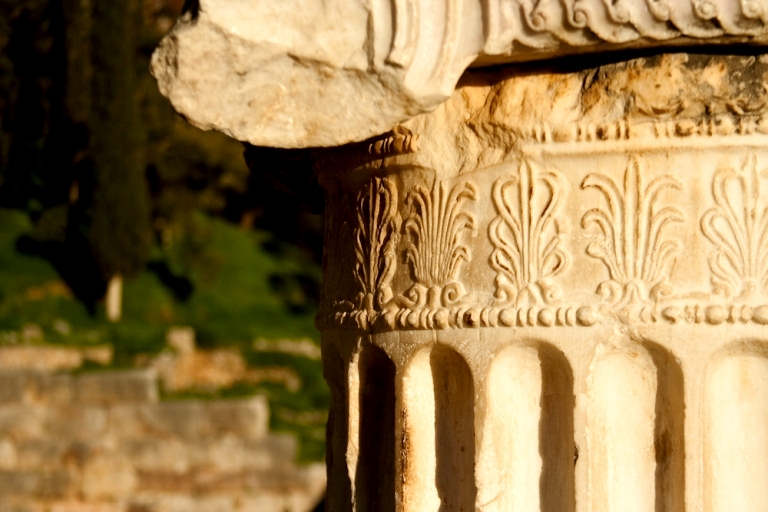