The distance from Crete to Rhodes Ρόδος is 485 km or 266 nautical miles. A plane flight takes one hour. The ferry journey from Kriti is 10-14 hours. More details about ferry transport below.

Exploring the island of Rhodes is full of surprises... Famous not only for her history and beautiful beaches, we love the village of Lindos, surely one of the most picturesque and fascinating seaside settlements in the Mediterranean.

We love Rhodes for her beaches and her history, and the discovery of a very different culture from our own beloved Kriti. Let us show you a little bit of what we discovered in the Dodecanese… 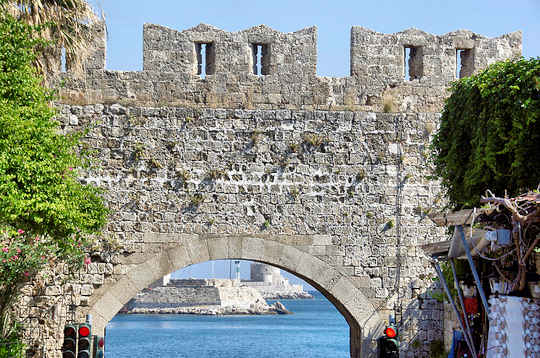 The Old Town of Rhodes 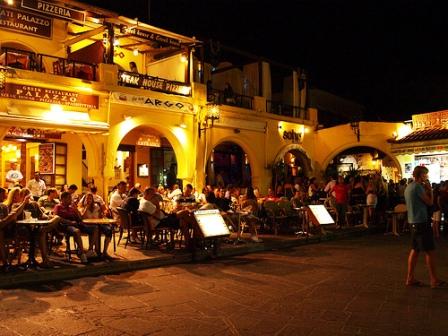 Crete to Rhodes - we suggest to avoid the busy tourist times of July and August and visit in shoulder or off-season, you will still be able to enjoy the atmosphere of this cosmopolitan town.

The turrets of the walls of the old town of Rhodes are etched in our memory. We glanced up from every angle whilst we walked around the old town, meandering through the various gates of entry and exploring different squares. The mixture of medieval towers, Greek and Italian architecture and tiny cobbled streets is entrancing.

"There are major sights to see; what we enjoyed was wandering without a plan through the old town and being surprised at every turn with a new view, a little steno or laneway, a different plateia or square, varied architecture, cafés and restaurants".

Highlights of the Old Town include:

The History of Rhodes 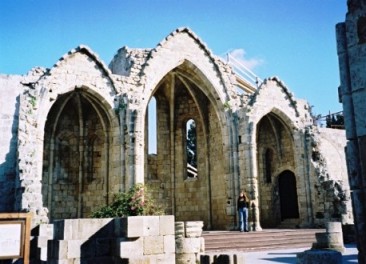 Crete to Rhodes - the history of Rhodes unfolds before your eyes. Rhodes was inhabited since Neolithic times, and earliest complex settlements seem to have been made from 1600 BC. The island’s location at the cross roads of Europe and the east, and proximity to Cyprus and Crete meant she was invaded and ruled by many different peoples over the centuries, and became one of the most important cities in ancient Greece.

Through the classical period, the Roman and Byzantine periods she remained one of the most influential cities in the Mediterranean. In 1309 AD she was ruled by the Knights of St John and later the Ottomans dominated. In recent times, between 1912 and 1947, Italy ruled the island, making significant architectural and structural changes. Rhodes became part of the nation of Greece under the Treaty of Paris in 1948.

The Old Town of Rhodes was declared a world heritage site in 1988. The UNESCO website describes the…"Upper Town is one of the most beautiful urban ensembles of the Gothic period."

The town was once surrounded by a protective moat which has now been emptied of water and forms a green park fringe around the old town which makes for a relaxing walk, whilst admiring the town and palace walls. See the section below on ferry trips from Crete to Rhodes.


The Palace of the Grandmasters 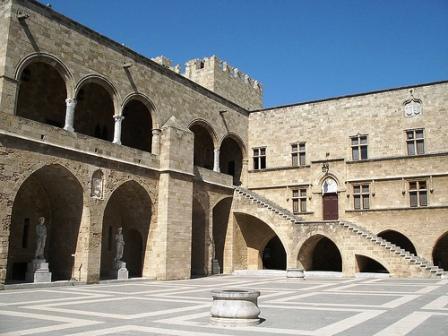 Crete to Rhodes - Palace of the Grandmasters

The Palace of the Grandmasters was built by the Knights of St John in the 14th Century. It was damaged by explosion of powder in 1856. It has been immaculately restored since then and seems as if it was built just yesterday. The building sits above the town, an imposing sight from the harbour side, it dominates the skyline.

The stunning towers either side of the entrance leave little doubt about the wealth of the builders and are an example of the strength to come within the structure.

The impressive central courtyard leads to large palatial rooms which house a collection of furniture, marbles, statues and artefacts. The rooms such as the reception hall and the ballroom are very impressive, if a little stark. The mosaics are some of the best preserved in the Mediterranean.

"Leave plenty of time to walk through the palace as it is large and there is a lot to see; of over 150 rooms in the building, only 20 or so are open to the public. Your entry fee of €10 also covers the Archaeological Museum and the Arts Collection".

We loved the steep-sided moats around the Palace, and from the Ambroise Gate to Saint Anthony's Gate leading to streets around the Palace is one of the most picturesque walkways. It is lovely to wander there at dusk and soak up the atmosphere.


The Street of the Knights 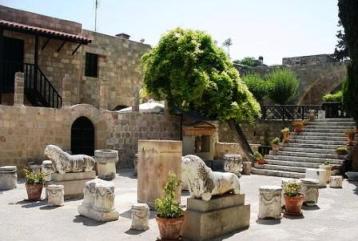 The Archaeological Museum is inside the former Hospital of the Knights, at the corner of Appelou and Ippoton Streets. The extensive collection takes a while to see, so leave this visit for another day if you are already planning to see the Palace. But don’t miss it as it is a lovely atmosphere inside the 15th Century building, and exquisite pieces from the complex history of this crossroads of east and west.

One of the most beautiful pieces in the museum is a marble statue 'Aphrodite of Rhodes' which is more then 2,000 years of age, dated 100 BC.

Choose your
accommodation on the map below... 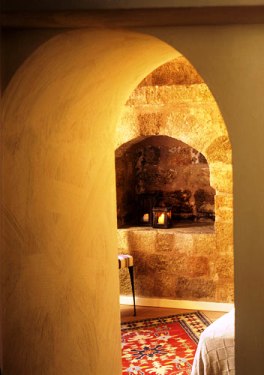 The Avalon Boutique Hotel is located in the old town of Rhodes. With only six suites, it showcases the character of the medieval building with all modern conveniences. The eclectic mix of styles hints at the modern stylistic of Rhodes itself, which is a cheeky mix of all styles through the ages with a seemingly scant regard for rules.

Rather a blackbird's collection of shiny things, brick-a-brack, fabric and textures culminating in an abundant overflowing of the ages past and present.

We cannot repeat enough - how beautiful the old town of Rhodes is - and we highly recommend staying within the old town walls, as facing the modern world will seem a rude shock. To really soak up the atmosphere of the town is to stay within the walls.

The Avalon provides a luxurious and elegant experience within the cobbled streets.

Avalon Boutique Hotel is at 9 Haritos Street adjacent to the distinctive Knights Street, a skip away from the Grand Masters Palace and opposite the Spanish Inn. 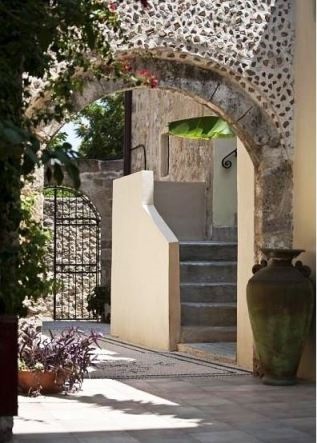 Crete to Rhodes - located on a high point of the old town of Rhodes in a narrow lane way close to the old town walls is the Spirit of the Knights Boutique Hotel. This architecturally designed, small guesthouse is just minutes away from the Grand Masters Palace, shops, bars, cafes and restaurants yet in a quiet lane away from the hustle and bustle.

This is a luxury boutique hotel with only six rooms, each one different. The restoration of the building was accomplished with close collaboration of architects and archaeologists, the owners keen to restore it with the utmost integrity. The result is magnificent, and travellers rave about the design and presentation, and the exceptional service.

The decoration of the suites is part of the charm and enjoyment of visiting here, with exotic items from Greece, Morocco, Turkey, Persia and the East. The ambience reflects the mercurial, colourful crossroads at Rhodes since ancient times.

Add to that a conscious environmental management approach, from the construction materials to the body care items, and travellers experience something very special, in a family run enterprise with personal attention.

Crete to Rhodes - a good budget option within the walls of the Old Town of Rhodes is Mango Rooms, above a cafe with internet, on the very pretty and leafy Dorieos Square.

This hotel it is good value, clean and convenient. Mango Rooms are open all year long, there is a roof top balcony with lovely views over the plaza and rooftops of the old zone, which has a story at every turn.

In the plateia is the old stone pergola and many trees, within walking distance are lots of cafes and restaurants including “The Walk Inn” with live music and home-made pizza and Pizania Taverna at 24 Sofokleous which is a seafood taverna with plenty of atmosphere, great service and yummy seafood.

A little further down is Romios Restaurant Taverna which serves good traditional Greek food, these places won’t break the budget and will provide an authentic dining experience. 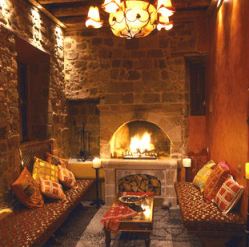 The Nikos Takis Fashion Hotel is at 26 Panetiou Street, just around the corner from the Grand Masters Palace and Ippoton Street. Again, this location is superb and this is a luxurious way to enjoy the old town of Rhodes.

Greek fashion designers Nikos and Takis have dressed Sofia Loren, Ornella Mutti, Jackie Onassis, Elizabeth Taylor, Maria Callas and Nana Mouskouri among others over the years and have now turned their design talents to restoring and decorating this 19th century building in the centre of Rhodes.

What a gorgeous result, but their talent does not stop there. The real measure of a hotel is its hospitality, and here it is given in yards and yards like the fabrics lining the rooms.

For those with an eye for European haute couture fashion, it should be no surprise that these respected designers have extended their vision to include this immaculate, stunning hotel.

Coming from Crete to Rhodes, we were eager to explore the restaurants, cafes, bars and nightclubs...

We mention some to continue your enjoyment of the historic old town... the lanes and courtyards softly lit at night were some of our favourite experiences of Rhodes old town.

Restaurant Ippotikon at 5 Evreon Martiron Square (above) is close to Marine Gate inside the walls of the old town. It is a romantic, historic setting for a beautiful meal, with views across the square from the tables on the upstairs balcony. The building is listed as an international monument by the national heritage organisation.

Just off Sokratous Street at 7-9 Menekleous Street in the old town is another large restaurant in a historic setting - Romeo Garden Restaurant - with an atmospheric terrace where live music is added to the menu in summer. Traditional Greek food and plenty of company make this a memorable experience. Try the wood fired pizzas...mmmm. 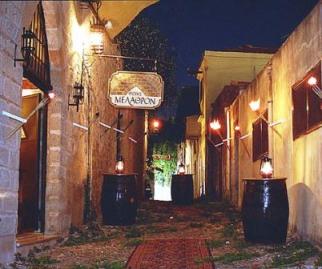 At 41t Sokratous is the Melathron Restaurant (above) at the more romantic and intimate end of the spectrum, a beautifully restored location with loads of Mediterranean mood styling.

We can never resist a relaxed courtyard setting with soft lights for an evening meal. Dinoris Restaurant (above) is located at 14A Museum Square in the old town and offers traditional Greek menu with a modern flair. 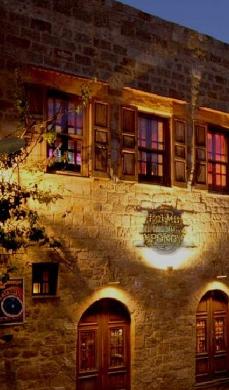 Rogmi tou Xronou or Crack in Time is a very cool music cafe bar in the old zone of Rhodes, run by the Diakogeorgiou family. A self-confessed "Rock and Roll" bar, it has live music every now and then and is a favourite hang-out for locals.

The ambience is very relaxing, as can be seen in these photos by Antonis Diakogeorgiou, and it exists as a modern bar on one of the oldest squares of Rhodes. 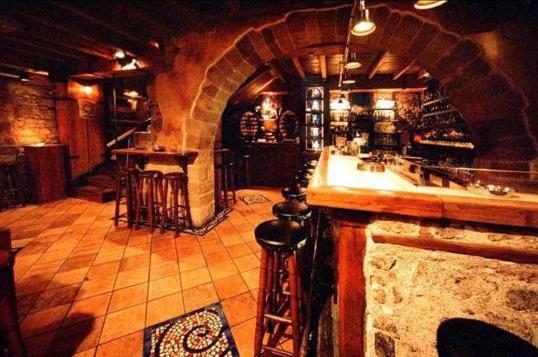 Getting from Crete to Rhodes 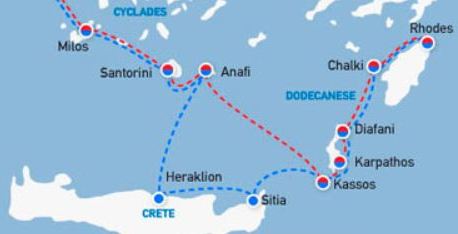 There are options to travel from Crete to Rhodes (or return):

The quickest way to get from Crete to Rhodes is to fly. The flight from Heraklion to Rhodes takes about one hour, and there are about 10 departures per week in peak season costing approximately €70-100.

In the quieter season, when direct flights do not depart, it makes a lot of sense to fly from Heraklion to Athens and then to Rhodes. Aegean Air flies both routes and this can be more economical than expected. Flying time from Heraklion to Athens is approximately one hour, as is the flying time from Athens to Rhodes. Leaving time for connections, it is still possible to do this in a morning or an afternoon.