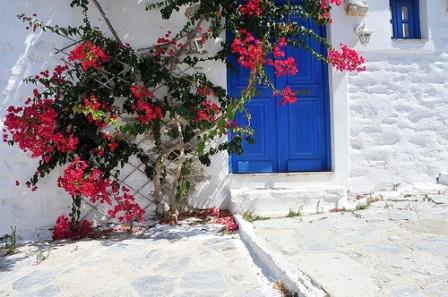 Amorgos Greece - Αμοργός - is a beautiful Greek island located in the Cyclades. It is one of the most easterly Cycladic islands, sitting south-east of Mykonos and Naxos, and north-east of Santorini. It is a long, narrow and hilly island with many beautiful beaches and rocky shores.

The relatively unknown island does not suffer from mass tourism, whilst still catering to travellers from all over the world, especially in summer. People come to enjoy the simple way of life, the quiet, the fresh air and the expansive views.

People come to simply sit at the beach and swim in the clear waters day after day. Others come to walk in the hills and visit the villages that preserve a way of life from simpler times. 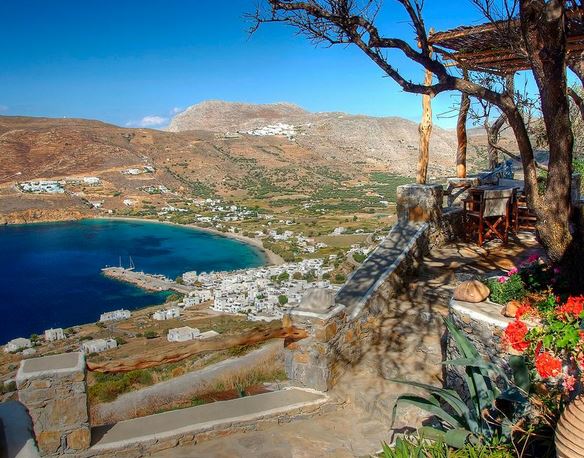 Katapola (above) is the arrival point of the ferries. It is a small fishing village with its own natural rhythm. There are some good fish tavernas here and a few small hotels and rooms for rent. Yachts moor here from all over the world and yachties sit in cafés soaking up the sun. It is a picturesque bay, a perfect horse shoe shape and one of the most protected bays in the Cyclades. High in the hills above the town are the ruins of the ancient settlement of Minoa.

Aegiali (pictured above and below) is one of the most tantalising and romantic seaside villages in the Cyclades. The combination of soft greens of the tamarisk trees by the water, against the intense blue of the sparkling Mediterranean, against the bright white sugar-cubed village is breath-taking. Aegiali beach and the longer Ormos beach have beautiful white sand with plenty of wide open spaces. 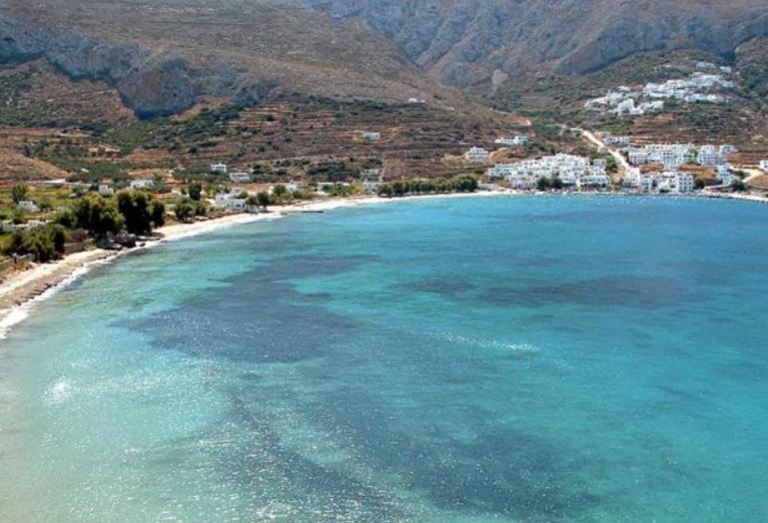 Just 5 km inland from Katapola is the island's largest town, known simply as Chora. The town clings to rocky mountains with a castle at the highest point. Old windmills are dotted about in various states of disrepair. The narrow streets are well worth exploring. In the main street there is the Mansion of Gavras, a beautiful aristocratic building of Venetian style of the 16th century. Today it houses the archaeological collection of the island. 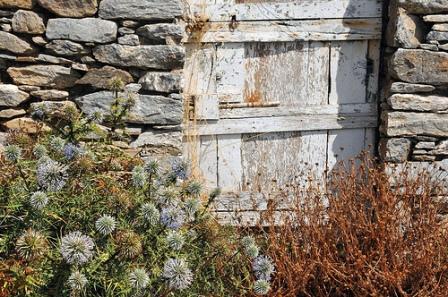 Other inland villages to explore on Amorgos Greece include Tholaria, Langada, Arkesini and Kolofana (or Kalofana).

Levrossos Beach (pictured above) is a small secluded cove just north of Aegiali, just around the bay. It can be reached by a walk and a hike 15-20 minutes from Aegiali or by car, take the road from Aegiali to Tholaria and turn off left before you reach Tholaria. There is a tavern and some rooms, a lovely tree-lined beach with sand and shade.

Further around the bay is Psiliamos Beach and then Xoklakas Beach. 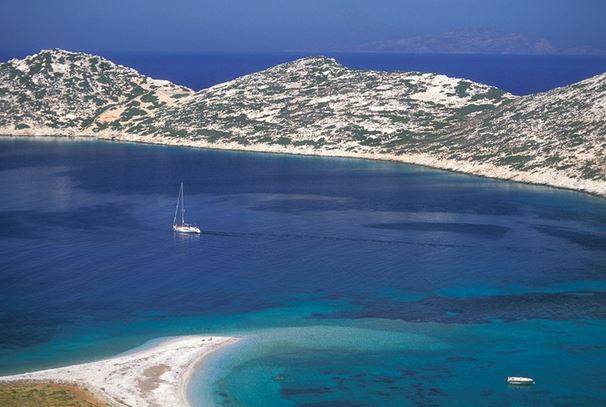 Agios Pavlos Beach (above and below) is on the west coast of the island just over 5 km south from Aegiali, it is a pristine sand formation sitting in the middle of a picturesque natural bay formed by the island of Amorgos and the smaller island of Nikouria (see below). There are a couple of pensions and a taverna here, otherwise, stunning nature dominates. 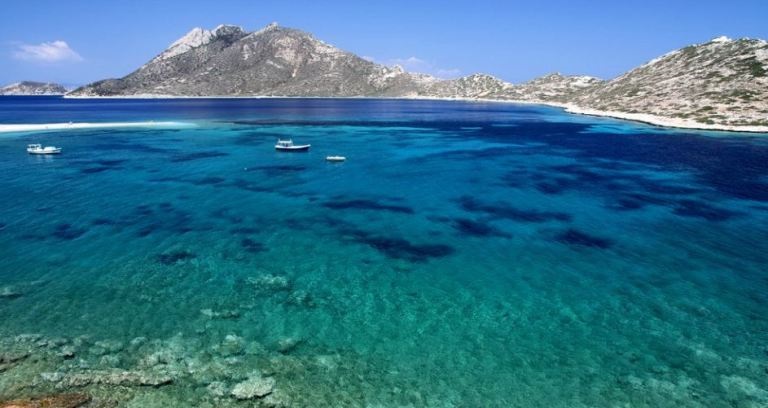 Agia Anna Beach is below the beautiful monastery of Panagia Chozoviotissa, and is somewhat famous as the scenes for the film 'The Big Blue' were taken here. There is a regular bus service from Chora, which is more frequent in summer. The crystal clear waters and dramatic architecture of the monastery make it a uniquely beautiful spot. 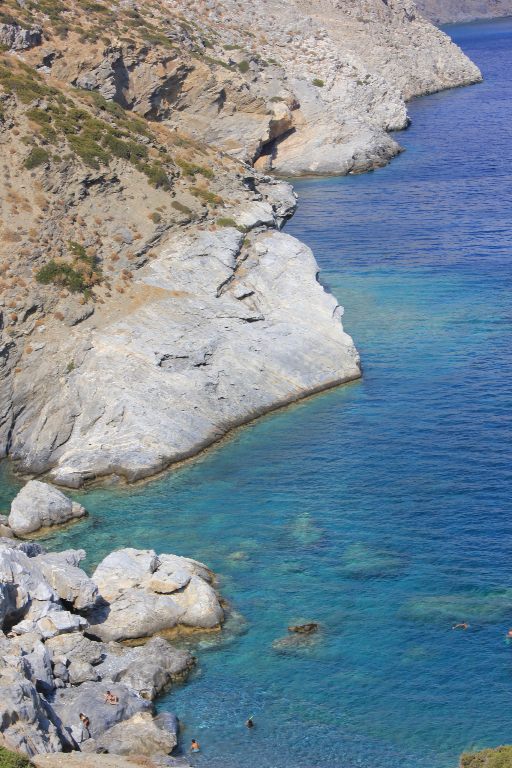 The Island in Movies 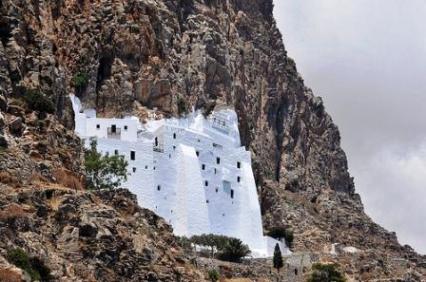 The Monastery of Panagia Chozoviotissa (above) is remarkable for its juxtaposition against the harsh rocky cliffs, and bright pure white walls of the edifice. The original structure dates from 1088 AD.

It is said that an icon of the Virgin Mary was found in the waters off the rocks, in this place, many years ago, before there was any idea of the monastery. It is said that the icon came from the village of Hozovo in Palestine, so the -iotissa ending means 'she of Hozovo'. The construction of this place of worship and comtemplation must have been a true labour of love, situated as it is 300 metres up on a sheer drop above the sea. 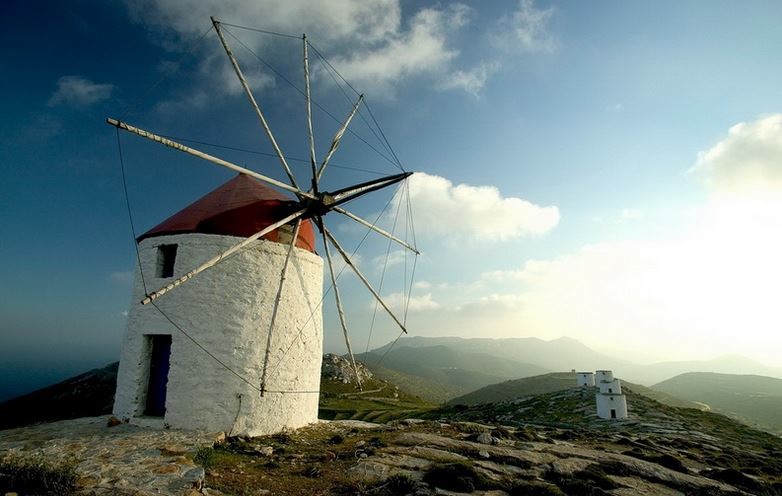 At Cape Vathy near Katapola is the traditional Lighthouse of Amorgos (above) which dates from 1882. A solid structure made from local stones, it sits on the windswept peninsula.

The Wreck of the Olympia is located at the western end of the island at Liveros. This stunning location featured in the film The Big Blue.

Pano Gitona (below) is a small aparthotel with only eleven rooms overlooking the bay of Katapola - with such style and white crispness, it epitomised the Greek island experience - the time here will leave you feeling uplifted from the incredible views, crisp fresh air and expansive scenery. 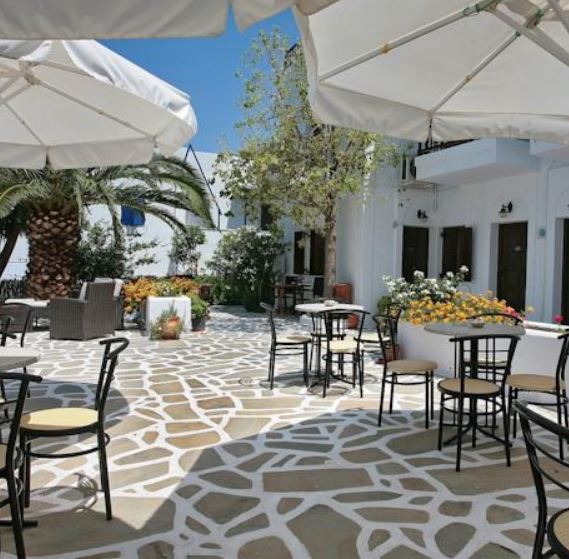 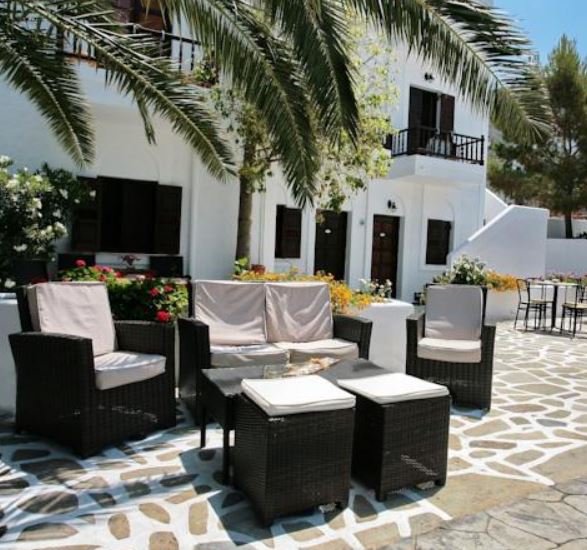 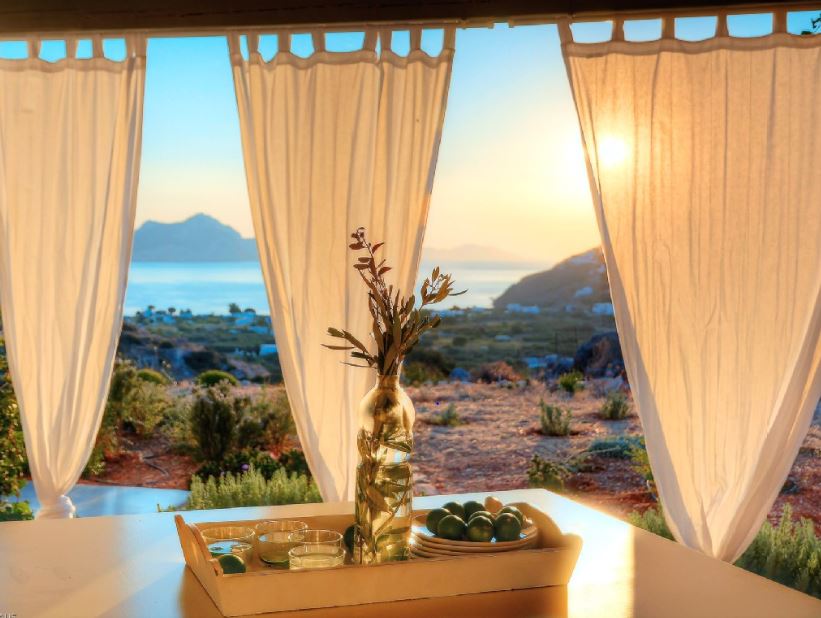 The view from the patio of Villa Handras just outside of Aegiali, Amorgos

Situated in quiet countryside outside Aegiali in Amorgos Greece is the Villa Handras (above and below), actually two villas with exquisite views, stylish charm and complete privacy whilst wanting for nothing from your host.

These completely modern environmentally-sound buildings have been created in the island style, with patios facing the exquisite bay and sunset aspect. Both villas sleep four with one bathroom each. From the houses you can see glimpses of the white villages of Tholaria and Laggada. Less than 2 km from the port and the beach, you are assured of a wonderful position from which to explore Amorgos Greece. 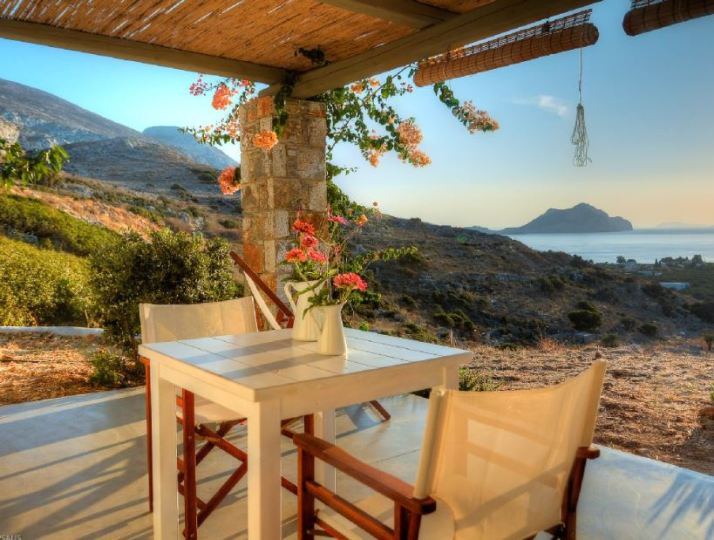 Getting to Amorgos Greece

Amorgos is a little out of the way and more difficult to get to than other Greek islands. That is what keeps it special.

From Athens - in the busy season, flights are available to the nearby islands, for flight timetables and bookings check with Olympic Airlines and Aegean Air.

Here you can see a video collage of Amorgos Greece - scenes including the pretty harbours, mountain views and Chozoviotissa Monastery:

This video shows the beauty of Amorgos blue and white and space with time to breathe...