The Ancient History of Crete

Let us explore the ancient history of Crete, this fascinating isle, steeped in mystery. The cradle of European civilisation, has given the western world so much in the way of art, culture and lifestyle.

It is hard to believe that Crete had been lost to myth until the last decade of the 19th century.

Considering the Cretans had a lifestyle equal to the 20th century, this makes Cretan history that much more interesting.

We could not comprehend the weight of these discoveries until these developments in technology.

It was the cross-referencing of earthen wares, seals and various arts that had been buried in Egyptian pyramids, that allowed us to date the findings of the ancient history of Crete. These finds buried with the treasures of the Egyptian Kings and Queens, had long been identified as non-Egyptian; yet we had not been able to identify their creators.

All we knew was that they were of the same age as the artefacts they had been buried with. It was not until the Cretan finds came to surface that we could finally piece the riddle together and identify who the master artisans were, and thus when and where they where made.

The Neolithic Age - (circa 7000 - 3000BC)
To this day we still have not found human remains from before this period. We find a myriad of animal remains, including pygmy hippo, pygmy elephants, wild goats, deer, and beech martin.

This period of the ancient history of Crete is divided into four periods. 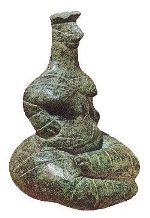 Aceramic Neolithic - (6000 - 5700BC)
The early inhabitants of ancient Crete have lived on the island since 7000BC as shown from archaeological evidence. Findings show that in these early days they had far more contact with the lands of Egypt, Libya and Syria than they did with the mainland of Greece, and may have possibly originated from these lands. Authors of the ancient history of Crete hypothesise that these people came to live on the island from neighbouring lands based on the limited finds from before this time.

This is based on the fact that the earliest findings we have, indicate a population that is reasonably evolved for this time. This belief is founded on a lack of evidence to prove otherwise. We have found that Knossos was the first area to have been habitated. Initial habitation was in caves, semi-permanent huts, and then quite sophisticated dwellings made of sun-dried mud brick set on stone settings were developed.

There were in fact two separate races at this point in the ancient Crete history, indicated by two different body types and different styles of dwelling. The remains of both these distinctly different races had a skeletal frame that was slender and indicated that they were not overly muscular in build. 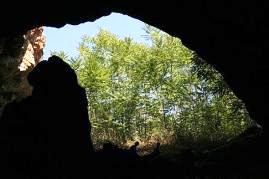 There was a race existing at Knossos that had longer skulls and who built huts made of wattle that were plastered with mud. Later sun-dried mud brick was used set on stone foundations. Though these dwellings were simpler than their cousins, they produced a larger number of artefacts that were quite advanced in style.

The second race were settled at Magasa. They had a broader shaped head, and their artefacts were cruder and simpler in design. Though they had a more complicated dwelling. They constructed homes with low walls of stone built around a timber framework which they then enclosed in brick. The internal walls were plastered, with a roof of plastered reeds.

There are no signs of pottery from this ancient Crete period, though two figurines of baked clay have been found from this period. We also find quantities of obsidian used for tools suck as knives and arrow heads. This obsidian is believed to have been brought from Milos.

Early Neolithic - (5700 - 4000BC)
Agriculture and herding are further developed, with an economy now including goats, sheep and pigs.

Pottery has now evolved to a high degree, with stylised handles and rims, and finished in dark colours with highlights of white or red that is often incised into the surface.

Tools of a high level of sophistication made of stone, wood and animal horn have been found from this era.

From this period till the end of the Neolithic period of the ancient history of Crete, the Minoans bury their dead in caves. Multiple burials took place within any given cave. The bones found in these caves seem to lack any order or what might appear as a ritualistic process. The bones of multiple bones have been mixed together. This could be for the fact that these caves were used over an over again, and bodies seemingly placed on the bones of previous burials.

Early Neolithic II - (4000 - 3700BC)
There is not a great deal of change from the previous stage of the ancient history of Crete. Though we now see some newer styles of pottery incorporating textured ripples.

As time passes, the Cretans create larger quantities of earthen wares. We also see the introduction of weaving using the spindle whorls, loom weights and shuttles.